From the folks who brought you 'land without a people': Spin and Carnage 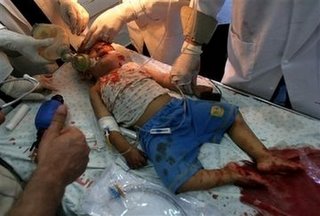 Yahoo Main page and Google News thought IOF's denial of responsibility for the beach killings was more important than today's carnage courtesy the "light unto the nations." picture from Sabbah's Blog

Predictably the US media fails to recognize the deaths of Palestinian children as the report that the IOF didn't do it from the folks who wreaked havoc in "the land without a people for a people without a land" headlines google news and yahoo main pages. There is no headline on either page about the eleven Palestinians who were killed by Israel's missiles today.

What our media, enthralled by Israel's spin doctors, doesn't want its readers to see Sabbah provides...death in the concrete (not for the faint hearted).

At 10:30 PM in Germany; however, one could glance at Yahoo's main page news and be totally oblivous to today's carnage--the headlines:

And this is on its main news page:

Not even a mention of the medics, kids, and other civilians who Israel killed today.

So, the spin is effective; with scant evidence provided in the accompanying stories, other than that "shrapnel" taken from the victims currently being treated in Israeli hospitals doesn't match Israeli shrapnel, the seed is planted in the minds of many Americans, who won't look at the stories, or who are oblivious of Israel's bloody history, that Hamas blew up its own people.

Israel's record speaks for itself. Israel has perpetuated massacres, expulsions, ethnic cleansings, demolitions, well poisonings; Israel shot at refugees returning to their homes in the late 40's and 50's; Ninety-three percent of Palestine was confiscated for 1948 Israel, and Israel continues to murder and lie about it; these fine folks who had everyone going for awhile that Palestine was a land without a people for a people without a land, and who still have the mainstream media perpetuating their latest in a long line of murderous spin.

"All the evidence points to the fact that it couldn't have been a mine," said Marc Garlasco, a former Pentagon expert on battlefields who led the US military's battle damage assessment team in Kosovo and worked for its intelligence wing, the Defense Intelligence Agency.

"You have the crater size, the shrapnel, the types of injuries, their location on the bodies. That all points to a shell dropping from the sky not explosives under the sand...

"But after investigating the scene, Mr Garlasco concluded that the army's explanation is deeply flawed. Among the new shrapnel he collected at the scene of the deaths is a piece stamped with the figures: 155MM.

"'The 155mm shell is what Israel uses in the howitzers that regularly shell northern Gaza,' he said."