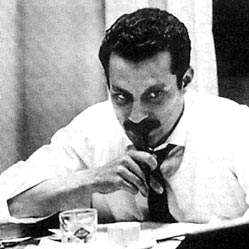 Ghassan Kanafani was born in Akka on April 9, 1936. He became a refugee in 1948.
He "was blown up in a car explosion, which also killed his niece, on July 1972. Amid the wreckage a scrap of paper from the Israeli Embassy in Copenhagen was found, a reminder of the fate awaiting those who fought Israel."

When we had to leave Jaffa for Acre there was no sense of tragedy. It felt like an annual trip to spend the feast in another city. Our days in Acre did not seem unusual: perhaps, being young, I was even enjoying myself since the move exempted me from school... Whatever, on the night of the big attack on Acre the picture was becoming clearer. That was, I think, a cruel night, passed between the stern silence of the men and the invocations of the women. My peers, you and I, were too young to understand what the whole story was about. On that night, though, certain threads of that story became clearer. In the morning, and as the Jews withdrew threatening and fulminating, a big truck was standing in front of our door. Light things, mainly sleeping items, were being chucked into the truck swiftly and hysterically.
As I stood leaning against the ancient wall of the house I saw your mother getting into the truck, then your aunt, then the young ones, then your father began to chuck you and your siblings into the car and on top of the luggage. Then he snatched me from the corner, where I was standing and, lifting me on top of his head, he put me into the cage-like metal luggage compartment above the driver's cabin, where I found my brother Riad sitting quietly. The vehicle drove off before I could settle into a comfortable position. Acre was disappearing bit by bit in the folds of the up-hill roads leading to Rass El-Naqoura [Lebanon].

It was somewhat cloudy and a sense of coldness was seeping into my body. Riad, with his back propped against the luggage and his legs on the edge of the metal compartment, was sitting very quietly, gazing into the distance. I was sitting silently with my chin between my knees and my arms folded over them. One after the other, orange orchards streamed past, and the vehicle was panting upward on a wet earth... In the distance the sound of gun-shots sounded like a farewell salute.

Rass El-Naqoura loomed on the horizon, wrapped in a blue haze, and the vehicle suddenly stopped. The women emerged from amid the luggage, stepped down and went over to an orange vendor sitting by the wayside. As the women walked back with the oranges, the sound of their sobs reached us. Only then did oranges seem to me something dear, that each of these big, clean fruits was something to be cherished. Your father alighted from beside the driver, took an orange, gazed at it silently, then began to weep like a helpless child.

In Rass El-Naqoura our vehicle stood beside many similar vehicles. The men began to hand in their weapons to the policemen who were there for that purpose. Then it was our turn. I saw pistols and machine guns thrown onto a big table, saw the long line of big vehicles coming into Lebanon, leaving the winding roads of the land of oranges far behind, and then I too cried bitterly. Your mother was still silently gazing at the oranges, and all the orange trees your father had left behind to the Jews glowed in his eyes... As if all those clean trees which he had bought one by one were mirrored in his face. And in his eyes tears, which he could not help hiding in front of the officer at the police station, were shining.

When in the afternoon we reached Sidon we had become refugees.