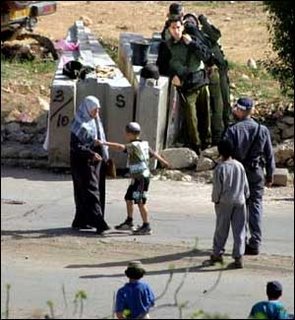 Lawrence of Cyberia and I find it appalling that the soldiers just watch the settler boy as he refuses to let the lady cross the street.

Some people want to dialogue with the Israelis while our medical volunteers are getting beat up with rifles from thugs in the IOF and while seventy-four year old men have their houses demolished on top of them. I don't. I want to resist every way that I can as a US citizen. I want the US to stop investing in Israel. I don't want to empower Israel in any way and I'm sick of stories about "nice" Israelis. Most of the time Palestinians do not even represent themselves in the media. Who writes the Nakba story, albeit a very good story, for Counterpunch? A Palestinian? Think again.

It is appalling that 2500 middle class immigrant Jews from France and North America are going to jet in to Israel this summer while our old people sit in refugee camps, some a stone's throw away from their personal property to which they have the deeds while Israel continues to deny them their natural, inalienable, and legal right to live on their own property.

Write your congressman, visit them in your hometown; they're pretty nice, just nice hometown people like us work in the offices, write a letter to your hometown newspaper every day; even if they're not published, they're important. Don't empower the Zionists in any way. They don't need our help. It's like helping the boss get someone fired. They hold most, but not all of the cards...don't give them any more. And unite...history shows that divide and conquer works every time to stop resistance. According to Zahi Damuni, co-founder of Al-Awda, Palestinians are 'irrelevant' to Israel, but they're not irrelevant to me.

If one googles his name, one finds it only on a Palestinian news site. If one searches yahoo one story comes up.

They wouldn't let the medical workers answer the phone. They took away the workers' cell phones.

The Israeli Occupation Forces beat up "Sameh Ahmed, 37, of Nablus Ambulance and a volunteer Merwan Shanti, 24, of Palestinian Medical Relief" with their rifles.

Then there's the school that villagers built for their kids because the Apartheid Wall keeps the kids from going to two other schools. But Israelis have a special knack for blowing up villages, sort of like the Taliban, and they're hell bent on demolishing the school.

We call this kind of crap 'neglect' in the states:

Two gates have been built next to Jubara in the Wall: one for farmers with pecial permits to pass to their fields and the other for all the village population. Only residents of Jubara can pass to and from the rest of the West Bank to the village, and only at set times. At 6:30 a.m., 1 p.m. and 4 p.m. the gate normally opens for one hour only. During Jewish festivities, other holidays, or before and during military attacks on the West Bank, the gates remain closed. Sometimes the soldiers close the gates in front of the students without any given reason. Life for the students from Jubara is thus completely in the hands of the Occupation, their school attendance depending on the mood of the soldiers.

Do something effective instead of waxing poetically how bloggers are going to change the world by talking with each other. Do you like talking with racists and those who empower racists? Do you like talking with rapists and those who empower rapists? Do you hang out with thieves? Forget the comments sections in the blogs or enable moderation so that you don't waste time and energy 'dialoging.' Zionist tossers don't give a damn about you. We're irrelevant to them; Talking to the 'nice' Zionists serves their puropse by making Israel look good, and the 'nasty' ones deplete precious time and energy. Talk to your congressman instead. Write to newspapers. Reach out to the mainstream, the benefactors of these crimes, US citizens, many don't know what's going on and if they did would be appalled that they're funding it.

Quit fooling around while children are getting shot through the head and heart.

Resolve that everything that you do will be to towards implementation of the civil, human, legal, and inalienable rights of our relatives in Palestine.