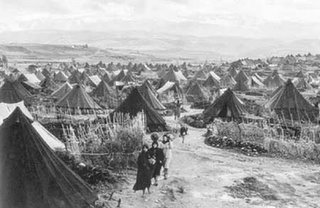 Kamal Nasir, Palestinian poet, killed by an Israeli death squad on April 10, 1973 during a time when 1570 Palestinian educators, doctors, and professionals were deported from their homeland as well as assasinated and maimed in botched assasinations. Their crimes: intellect, resistance, leadership This poem was written in 1961.

I will tell you a story
A story that lived in the dreams of people
A story that comes out of the world of tents
Was made by hunger and decorated in the dark nights
In my country, and my country is a handful of refugees
Every twenty of them have a pound of flour
And promises of a relief...gifts and parcels
It is the story of the suffering group
Who stood for ten years in hunger
In tears and agony
In hardship and yearning

It is a story of people who were misled
Who were thrown in the mazes of years
But they defied and stood
Disrobed and united
And went to light, from the tents
The revolution of return
in the world of darkness.