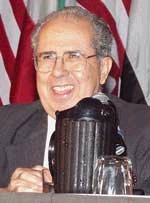 Dr. Salman Abu Sitta at the Palestine Center in Washington DC, May 27.

What a tower of humanity Dr. Salman Abu Sitta is. What a model of the nobility one may attain in a world in which wrong is lauded by craven and prostituted politicians and humane people are condemned as extremists at best and anti-Semites at worst. Dr. Abu Sitta's The Atlas of Palestine 1948 provides documentation of truth that has been sucked right out of the national discourse by a calculated, systematic, and pernicious Zionist campaign of vilification of all which is Palestinian.

Dr. Salman Abu Sitta provides the following documentation and information in his masterpiece, which he illuminated at the Palestine Center in Washington, DC on May 27.

"The Atlas . . . resurrects the original names of places erased by the Zionists starting in 1948. 'The names also restore the vocabulary of the people and the history.'

"Abu Sitta documents that in the post-World I division of the Arab world into French and British spheres of influence, 23 Palestinian villages were dissected. 'Their lives were shattered . . . the story of all this is colonialism, where the foreign poweres divide the land and the people suffer.'"

He also notes that " another 111 Palestinian villages were dissected [when the 1949 armistice line was created] . . . 'people were crying and screaming behind the U.N. and Israeli surveyors who were arbitrarily dividing the lands and villages.'"

Abu Sitta documents 70 massacres. And with what will rank beside Dr. Walid Khalidi's seminal works Before Their Diaspora and All That Remains, Dr. Abu Sitta describes the depopulation of 675 villages, detailing "when people were expelled . . . by which military operation, and why people left."

Dr. Abu Sitta shatters the Zionist lie that the havoc they wreaked on Palestinians was the result of attacking Arab armies. Perhaps now the disinformation that Arab armies attacked tiny Israel will finally go the way of the 'land without a people for a people without a land' malicious lie. " ...half of the total Palestinian refugees were created by Zionist militias while Palestine was still under British mandate and before the establishment of the Jewish state . . . it gives credence to the claim that Arab militias were responding to Zionist ethnic cleansing when they came to Palestine to save what little was left."

And take note collaborators and all those who have made a career of the "peace process." Dr. Abu Sitta says, "The Right of Return is an inalienable right." Nobody, absolutely nobody, and give this right away beyond the person themself."

Included with The Atlas " is a guide describing how refugees can find villages and other sites using modern Israeli roads. The Atlas exists 'not only to recover the names of Palestine . . . but as a blueprint for the future, when the Palestinian people will be allowed to return home.'"