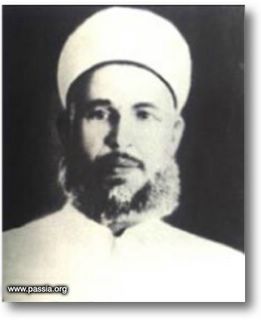 Khalidi, Walid. Before Their Diaspora: A Photographic History of the Palestinians 1876-1948. Washington DC: Institute for Palestine Studies: 1991. (111)

Shaikh Izz al-Din al-Qassam, was a patriot, social reformer, and religious teacher from Haifa. "His work and preaching were conducted mainly among the poorer classes. Right-wing Zionist political demonstrations at the Wailing Wall, the formation of the enlarged Jewish Agency, and British sponsorhip of mounting Zionst mass immigration convinced him that political and diplomatic efforts were futile and only armed struggle against the British would influence London. In November 1935, he organized and led a small guerilla group against British security forces in the first guerrilla operation of the Palestinian national movement. He died in action with several of his followers, and immediately became a national hero. His martyrdom triggered the great Rebellion of 1936-39, and his example was very much in the minds of PLO leader Yasser Arafat and Arafat's colleagues three decades later."