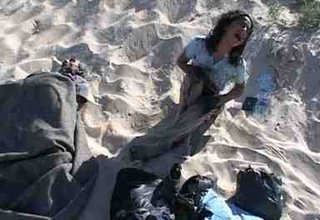 Moi taped the wrenching Al-Jazeera video of Hadil screaming "yaaaabaaaaa," which means daddy. My reaction is here and Khalid Amayreh's comment is here. Other reactions to the Bahr al-Sudaniya massacre in Gaza:

We call on the Palestinian Authority to prevent all acts of terrorism, including the firing of missiles and rockets from Gaza. Sean McCormack, Spokesman, US Department of State

I cannot get her voice out of my head. Her screams pierced through my body and soul as she began to fathom the fate of her father lying lifelessly in front of her. "Yaaaabaaaa" means "Daaaaddyyyy". Her Daddy is no more. Her Mommy is no more. Her siblings are no more.
Moi, My Occupied Territory

We called my Aunt, who works with the al-Awda hospital in northern Gaza. She was hysterical, and this is a woman who seldom loses her grip.

She just spoke of blood and body parts, and how one of the cameramen at the hospital couldn't hold it together and dropped his camera as he was filming after he heard a bloodied, batterd girl crying out for her father.

I feel so useless being here, so impotent and angered, and I just want to cry and scream at once. After a week of energizing talks, in which I really felt I could contribute a little bit by informing people this happens. Laila El-Haddad, Raising Yousuf

I just read of this horrible massacre of children on the beach, and my heart sank, and my tears fell. You are not alone in feeling impotent- we feel it in America, too, as we cannot stop our government from facilitating these inhuman Israeli attacks that go against every American principle. I am so sorry for American complicity in these attacks, and will continue to fight to change our foreign policy to one that reflects American values, of fairness and justice for all people, including Palestinians and Iraqis. Comment from Liz on Laila's Blog

A tear tried to escape from my eye, but I am a man, and men do not cry… men fight.Am I a man? I do not know…

Watching that small Palestinian girl on the T.V. arose doubts in my mind… Am I a human being? What did I do after watching her? I only tried to get out her image from my soul but could not.

She was with her mother, father, and sisters in a picnic at Gaza beach. They were setting together… laughing… playing… Suddenly, an "Act of Defense" against this laugh landed on them turning the laughing faces into bloody dead parts…The girl ran from the body of her mother to that of her father trying to wake them… her scream pierced my heart…

While watching all this and more on Palestine TV and Aljazeera, I, my wife and all my kids, all started crying. We could not stand the scene of the wounded and dead kids, women and elders, and especially the girl you see in this video, running on beach after she lost her mind when she saw the dead body of her father laying on beach. Haitham Sabbah, Sabbah's Blog

they were shot at from the sea and the air. why?! is swimming now deemed a threat to israel? i asked how many more mornings would i have to wake up to this kind of news, more importantly- how many more palestinians have to die this way, why must innocent people continue to be killed? why doenst anyone do something, why dont i do something, what can i do anyway? my heart go out to everyone- the victims, their families.....i dont know what i would say them? pat them on the back and say its ok? its not ok- at all. comfort them and tell them i know how they feel? i dont know how the feel- i dont know how it feels to lose a mother a father a sibling to idf brutatlity. so what do i say to them, as a palestinian living here in the states, that is free to go anywhere she wants- she can go to the mall and buy whatever and the only thing that would delay her is traffic on the highway- not a checkpoint. do i go back and express my solidarity with them by living with them- well i cant even do that- i cant stay longer than three months at a time. so what do i say, or what do i do, to make it better? i really dont know. Al-Falasteenyia

PCHR’s preliminary investigation indicates that the attack which killed seven members of the same family took place at approximately 16:40 on Friday, 9 June 2006. An Israeli naval boat stationed off the coast of Beit Lahya fired seven successive artillery shells at civilians on the beach in the Waha area, north of Beit Lahya. The shells landed on the beach, which had been crowded with civilian men, women and children at the time. Seven civilians from the same family (father, mother and five children) were killed. A sixth child from the same family escaped death but was seen on television crying hysterically beside her father’s body. A further thirty-two civilians, including thirteen children, were injured. Two of the injured sustained serious wounds.

Israeli television Channel 2 broadcast footage of the Israeli boat firing the shells at the beach, with one of the navy soldiers scanning the beach with binoculars; thus indicating that the crime had been perpetrated with a premeditated intent to kill. Palestine Centre For Human Rights

IDF officials said Saturday that even if it turns out eventually that the civilians' death was the result of army artillery , the strike took place in open areas where the Palestinian know that movement is banned. Therefore, they said, this is the unfortunate result of the ongoing war on terror, not an operational failure. ynet news

The Israeli navy decided to stop shelling. For now. I guess to give the Palestinians a chance to collect all body parts, which I hear were blown all over Gaza's beautiful beach.

But not to worry.

The army (or navy in this case) will investigate.

They will investigate why people die when shells land on their heads.

They won't be investigating the toxic level of hatred in people's hearts which allows them to keep killing Palestinians in this way, day in and day out.

They won't be investigating the indifference of the Israeli population to these massacres that are committed in their name and for their security.

They won't be investigating the level the dehumanization of the Palestinians has reached that nowadays nobody cries for their dead.

Comments:
Um Khalil
i have not forgotton that scream either . i wonder what happened to the litte Huda , i hope she was able to cope with her pain . i know she wont be able to forget but so many palestinians re in her situation .