Summer at the Seashore in Palestine 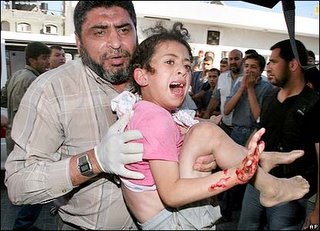 The self-proclaimed "light unto the nations," in its ongoing fifty-eight years and counting genocide of Palestine's indigenous population massacred three kids, two women, and two men who were out for a day at the beach today.

Do we want to screw around about "talking" to the proponents of this toxic ideology who stole ninety-three percent of Palestine or do we want to hasten the day that the Universal Declaration of Human Rights, Article 13, Section 2 is implemented. It says: "Everyone has the right to leave any country, including his own, and to return to his country."

One way to honor the inalienable, civil, and human rights of Palestinians is for everyone to get behind the boycott, sanctions, and divestment call that over one hundred and seventy Palestinian associations, federations, political parties, and NGO's have endorsed. No need to dither whether to boycott a criminal state, no need to dialogue for the next fifty-eight years. No need to play nice with thieves, ethnic cleansers, squatters from New Jersey, racists from Russia, defilers of all things organic who run roughshod in bulldozers while our young men use crude weapons and rocks to defy their cruelty and their lack of respect for the true people of the land, the Palestinians, not some whacked out religious fanatics from New York playing Moses in the wilderness.

And free yourself. It's easy. Repeat after me. I hate Zionism. Zionism is a toxic ideology. Israel as the "Jewish" state must be destroyed. This is neither a radical nor an extreme belief. The implementation of the inalienable right to return means that Israel as a Jewish state will be no more. Eleanor Roosevelt helped write the Universal Declaration of Human Rights. She was neither radical nor was she extreme. UN Resolution 194 has been reiterated over 100 times. Denying one's inalienable right of return promotes ethnic cleansing. Dr. Abu Sitta has pointed out that aiding and abetting ethnic cleansing is a war crime.

Right of return is a universal right; it is a personal right, it is an inalienable right, it is a human right. Israel's denial of this inalienable right to Palestinians is what is extreme and criminal. Its unwillingness to implement this right must be countered by all decent and peace loving people. There is no room for dialogue about this.