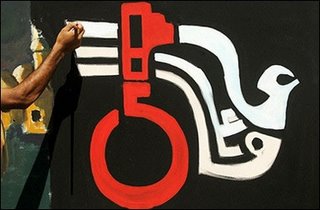 A prodigious number of Palestinians, young and old, are telling stories this Yom Al-Nakba (Day of Catastrophe), and it is exhilarating in spite of the fact that the Nakba continues; nevertheless, it is no small feat that Palestinian voices are no longer excluded from public discourse for they are literally bells of return. This is a continuation of my post from earlier today:

Like his father and grandparents before him, Yousuf, too, is a refugee. And like it or not-he, and the millions like him, will not "disappear", much as the government of Israel would like them to, whilst trying its utmost to render their return unfeasible and their plight irrelevant: it lives on. And American passport or not, "Palestinian" is stamped on his forehead (and in my identity document, to which he is added and thus rendered "Palestinian", not "American", by Israeli forces, meaning he is not alloweed to return or visit Haifa)... as the Palestinian Gazan poet Haroon Hashim Rasheed said.. "Filisteeni ana Filisteeni..naqashtu ismee ala kulil mayadeeni"

Fadi writes about his ethnically cleansed village of Lubya:

In Pretoria, South Africa today sits an olive tree dedicated to Lubya. The memorial reads, "To the Palestinain village of Lubya upon whose ruins a forest was built where cows were permitted to graze but the displaced occupants are not allowed to return ."

Joharah Baker addresses the continuing Nakba in "Til Israel Do Us Part" regarding Israel's High Court decision disallowing spouses in occupied Palestine to join their spouse in Israel:

Israel has elevated its oppression of the Palestinians into an art form, constantly creating ingenious ways of fencing them off, kicking them around and eventually squeezing them out.

Israel attacks one family at a time. Eventually, if families are not free to live in peace and prosper in their own homes, it is only natural that they will turn to other options outside this oppressive box.

This is a people who have lived in this land for generations, who can trace their lineage back hundreds of years to a stone house, to a single olive tree standing stubbornly in the rich soil of what was once an orchard tended by Palestinian hands.

Once, the late Dr. Ibrahim Abu Lughud, a prominent Palestinian scholar and refugee from Jaffa, said what sets Israelis and Palestinians apart is that Palestinians have claims to all of Palestine, from the Mediterranean Sea to the River Jordan, while Israelis do not.

No matter how hard they’d try, Palestine is there, it has always been there, Palestinians are there, they’ll always be and nothing can change that.

Anne Selden Annab On the Work We Must Continue to Do:

Speak strongly and honestly ! America needs to listen to the real people of historic Palestine, the real thoughts and feelings- and heritage, comprehend the real facts, in order to understand how cruel, heartless and unjust home wrecking racist Israel has been all along.

The Zionist crime called Israel has been a huge modern man made mistake. Palestine really should return in full- along with every Palestinian refugee.