Until Return...Palestinian Voices Remember and Inspire 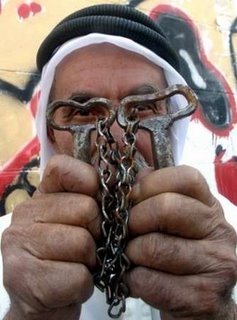 Right of return is inevitable because it is just. In 1967 one would not find stories of Al-Nakba. In 2006 everything is changed, and while Al-Nakba, the catastrophe, continues, the very fact that Palestinian voices are heard everywhere is cause for hope and joy for the inevitable day of return.

Poignant, articulate, steadfast Palestinian voices commemorate today's Al-Nakba anniversary and convey through their veracity the spirit of resistance that will prevail, inshallah (Arabic for God willing), until return:

Khaled Nazzal, a student at Jordan University of Science and Technology remembers his grandmother's flight in "1948 Al-Sendyaneh":

It was the 12th of May, 1948. That day was the beginning of our life as refugees. Jewish guerrillas (Etsel) invaded my hometown, Al-Sendyaneh (The Oak) at afternoon. There was no time to take any thing… My grandmother told me how she left everything in the house. There are a lot of stories how people left their food on the fire, their dough in the oven, Ash is still their in the ovens. Stones and sand brought from Qesaryeh to build the house of Sa'eed Zaidy were left in its state till now.

The story of my Palestine catastrophe begins in the village of Al Birweh, with its roots in the seaside district of 'Akka, rooted in northern Palestine.

Reflecting on this uprooting of Palestine, David Ben Gurion, the first prime minister of Israel, stated, "The old will die and the young will forget."

Palestinians have not forgotten. Palestine is in how we speak and in the way we dance. It is in the food we eat and the poetry we read. It is in the stories we tell and the futures we hope for.

The future that we all hope for - despite ethnicity, national identity and religion - is a future that is just and peaceful.

Justice and peace will only be possible if the undeniable right of Palestinians to return to our homeland is recognized and realized.

Al Falyasteeniya, who will graduate from an American college with a Palestinian flag emblem on her cap writes:

I am Palestinian- I'm not a terrorist. I'm fun to hang out with ( I think )- I can even make you laugh at times. I'm respectful...and I hope they see that- that we Palestinians, are just like everyone else; human beings. And we deserve to live. And we deserve rights. And we deserve justice. And that this is what the 'conflict' is all about.

I think of my mom walking into a refugee camp as a young girl. I think of the door my grandfather installed on our home in Safad, which he locked for the last time that day. I think of that clean, white house with the blue door, and wonder what it would be like for my kids to play in the courtyard. I think of my dad as a teenager working for the British army collecting bodies. I move from confusion to sadness to anger that the world allowed this to happen, and permits it to continue.

George Bisharat,professor of law at Hastings College of the Law in San Francisco, remembers:

I think first of my grandfather’s home in Jerusalem that was expropriated by the Israelis in 1948, and for which compensation has never been paid. But more than that, I think about the hundreds of thousands of other Palestinians who were forcibly expelled by Israeli troops or fled in fear, and who have not been as fortunate as me to find a secure and prosperous life in the United States. These more than five million Palestinians live almost within a stones throw of their homes and their homeland, and their right to return has been consistently recognized by the international community, yet nothing has ever been done to effectuate that right.

Diana Buttu, Palestinian-Canadian lawyer based in Gaza, remembers and reflects:

As a child of a Nakba survivor, I am haunted by the image of thousands of Palestinians fleeing to safety and I am left wondering what the Palestinians were living through that would make them flee their homes for safety. As a resident of Gaza, the daily Israeli shelling and frequent bombing raids have terrorized me. And, while I have often thought of leaving, I remain, as do most Palestinians. In the height of these bombing campaigns, I often think back to the Nakba and convince myself that I can live through it.

A dear Jewish friend of mine once told me that her mother was haunted by the faces of the people who idly watched her get on a truck that shipped her off to a concentration camp. I, too, am often left wondering what the watchers-by were thinking in 1948. More hauntingly, however, I am left wondering whether Israelis ever think that their state, which is supposed to be a haven for Jews, caused the dispossession of so many Palestinians. Have they not become the people who idly watched the Palestinians get on trucks?

Ten years in the making, Salman Abu Sitta's Atlas of Palestine 1948 is an heroic undertaking. It is, writes Amira Howeidy, nothing short of the resurrection of a land.

Karma Nabulsi inspires and is inspired:

The most promising thing I witnessed at them [civic meetings organized by young Palestinians] was watching this generation replicate something they have no first hand acquaintance with themselves, for it is never talked about and is as yet unwritten: the almost secret history of the underground actions of the previous generation of Palestinian resistants. Their current endeavours echo the same practices, the same spirit, and the same inerring direction. And in today’s reclamation project of the Palestinian past of the Nakba, the younger generation retrieve at the same time another history which is also theirs: the still uncollected stories of the previous generations of fighters who also worked in associations, parties, and groups in a similar collective spirit and with an equal passion.

In those early days, I would wonder with anguish how the Jewish incomers who took over our house could sleep at night, seeing our belongings, family photos, children's toys.

This mess is not the Palestinians' fault, and yet they are demonized because they dare resist injustice and a continued Zionist war on their basic human rights- and their families. What is more precious to civilization itself than diversity and nurturing all our children, protecting and passing on our true wealth and heritage by doing what we can to respect parenting and homes- our own and others- all families and love ... the cradle of civilization... And it is exactly that which political Zionism seeks to undermine and destroy so as to create and sustain the so-called "Jewish" State.

To be sure, the modern Israeli state has lethal weapons - very lethal weapons. But can it do with them, except make more enemies? Israel no longer has any special claim upon international sympathy or indulgence. The US won't always be there. Weapons and walls can no more preserve Israel forever than they preserved the German Democratic Republic or white South Africa.

During a joint press conference, Palestinian chief Muslim judge Tayseer Al-Tamimi and the bishop of Sebastia of the Greek Orthodox Church of Jerusalem [Atalla Hanna] and member of the Brotherhood of he Holy Sepulchure, who has acted as the spokesman of the patriarchate, affirmed that the Right of Return is “holy,” the hard core of the Palestinian – Israeli conflict and the key for peace.