Why Don't You Go Back From Where You Came? 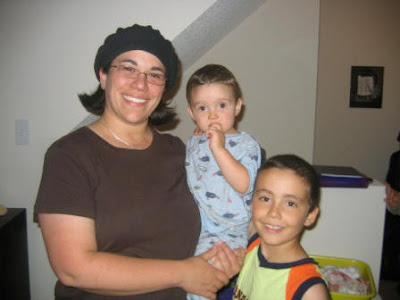 Isn't She Lovely?
This woman from the US made "Aliyah" to Israel. Don't expect me to tell you she has the "right" to haul herself and her family to Palestine when many Palestinian refugees live within a stone's throw of their property and contrary to international law are not allowed to return.
Zionist propagandists never tire of repeating that Arabs have twenty-two countries, Jews have only one, but try telling a Zionist to go back from where he/she came, and be prepared for an all out assault.
My friend and mentor, Annie Annab, writes daily letters to the media in regard to the Palestinians’ universally recognized right of return. She often points out how many Jews enjoy rights and privileges in two countries, i.e., those who have dual American/Israeli citizenship, whereas the indigenous Palestinians have no rights anywhere.
The Zionists, after usurping and destroying our land, as well as anti-Zionists, have a propensity to own the conversation, here, there, and everywhere. My late father was correct when he told me that the world would know about what really happened in Palestine when the Jews wanted it to know. Now, I will be called an anti-Semite, but consider, when Palestinians speak, no one listens. Case in point is today when Amnesty International revealed that Palestinians carrying white flags during Israel’s Cast Lead horror were shot. Every Palestinian who subscribes to a list serve knew this months ago, but now it's made the news.
When we do speak honestly, we risk careers or we are vilified and marginalized. I used to write at Daily Kos, but I was banned. At the time I was banned, I was the last Palestinian standing. Recently, a couple of Palestinians have joined the ranks, but for a long while only so-called anti-Zionist Jews could present their version of the Palestinian story at Daily Kos. I say "so-called," because some of them did not advocate for right of return.
To elaborate on my point that we risk careers if we speak out, let me reveal what happened at a social justice presentation I recently attended. I can’t reveal the particulars or I will most assuredly not make the cut to be a social justice trainer for a very large US organization. But what is telling to me is that many Jews were comfortable speaking before the group in regard to how their worldview was shaped by the Holocaust, but I could not get up and ask the presenters how in the hell could they presume to talk about social justice and not even mention the Palestinians?
Many Jews, who are Palestinian sympathizers, actually serve the function of mitigating Israel's image as a pariah state, and most likely would prefer that we steer away from uncomfortable questions, and when we don’t; for example, when we ask someone like Rabbi Arik Aschermann of Rabbis for Human Rights, “Why don’t you go back to America,” we risk being called “radicals” and worse. We’re supposed to be so grateful that there are Jews who support us, even, as in the case of the highly touted “kinder and gentler” Zionist Martin Buber, who for all his humaneness, lived in the usurped house of Edward Said.
Some of the really nasty Zionists at Daily Kos kept harping on some blog post I’d written on my own blog in a distant past in which I used the term “Zionist occupied America,” and, as if to prove my point, they called upon me to repudiate this phrase (they also were ticked because I’d compared a little Palestinian girl to Anne Frank). But America is Zionist occupied. The fact that I may not get up and speak freely in a forum about social justice is all the evidence that I need that if I want this position that’s good for my career I need to STFU. And the fact that Zionists who claim to be Palestinian supporters stop the conversation when we question the legitimacy of Israel, proves the point, also.
Recently, a Palestinian friend of mine who spoke her mind in a Facebook comment section was told "no one likes you" by an American/Iranian/Israeli who gained a little attention when he didn’t shave and put on a "Free Palestine" tee-shirt to walk around Tel Aviv, then wrote about it. Her mistake was to speak candidly instead of humbling herself before his so-called anti-Zionist self. I wonder if he would have written the same sentiment to an African-American. He presumed to tell her how she differed from other Palestinians he’d encountered. As if all nine million of us are alike. Her mistake was not worshipping at the altar of the Palestinian sympathizer who doesn’t sympathize enough to hightail it back to Europe or America and leave Palestine to the Palestinians (and I know that some of them have no place to go; I'm not proposing to throw the Jews into the sea). Her mistake was adhering to the highly radical notion of letting Palestinians interpret themselves for themselves and perhaps her naivete was in believing that there are spaces for us in public forums to speak freely about our own experiences when in fact there are not if one wants approbation from our Zionist and even anti-Zionist friends.
# posted by umkahlil @ 11:20 PM


It seemed obvious. The Romans expelled the Jews from Palestine, and the Diaspora began. But according to historical research stems primarily from contemporary Jewish converts. This conclusion also draws on its way microbiologist Jits van Straten.


. If he was right then, all Eastern European Jews, including almost the entire Israeli elite of that time, not descended from the biblical nation of Israel but of medieval Turks. Shlomo Sand goes even further. If a nation is akin to the ancient Israelites than that in his view the Palestinians.

I witnessed that wholesale purge of many outstanding bloggers for Palestine from Daily Kos. Many diligent voices were silenced for speaking the truth only. I insisted that they ban me also. It was a conceit. I had not written many diaries, knowing the response I would get. I helped by uprating hidden comments that were well stated, but I resigned.

Nothing has changed. The group that monitors Palestine diaries descends instantly to challenge any fact which evidences Zionist hegemony in the world and at Daily Kos.

Don't worry. They didn't win. They only put a huge exclamation point above their racism to draw everyone's attention to it. It's similar to what Israel is doing now with the consolidation of the right. No one will believe them when they say they want peace. Their actions speak louder than words.