David Letterman, Get A Clue 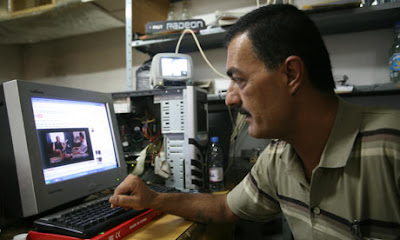 I have a problem sending youtube videos to this blog so if you haven't seen this video in which Ayman Abu Aita, whom Sasha Baron Cohen called a "terrorist" on the Letterman show, exposes his blatant Zionist propaganda, go to this link. Ayman is sueing Cohen for his defamation; I hope he is successful, and I hope this disgusting portrayal of Palestinians comes to an end once and for all. People in Letterman's position should know better than to be part of an ethnophobic charade.

Also, check out the Guardian story: The non-profit worker from Bethlehem who was branded a terrorist by Bruno

Promoting the film recently on the David Letterman talkshow in the US,
Baron Cohen explained that finding a "terrorist" to interview for the movie took
several months and some help from a CIA contact. He described the secular
Martyrs Brigades, most of whom signed an amnesty deal with Israel in 2007, as "the number one suicide bombers out there".

Abu Aita said: "My file is clear with the Americans. I was in the states
twice and I travel all the time." He is a Christian Fatah representative – of
the movement's political wing, he stresses – for Bethlehem district. He is also
a member of the board of the Holy Land trust, a non-profit organisation that
works on Palestinian community-building. "I am a non-violent activist and I am
not ashamed of that," he says.