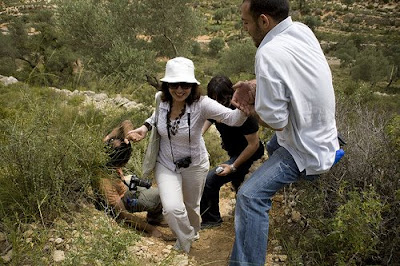 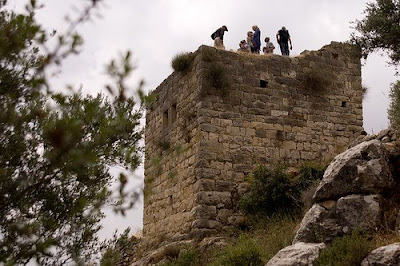 From the Palestinian Festival of Literature's Festival Blog for Sunday, May 24

After the drama of yesterday we were well prepared for the potential tranquility of a walk in the Ramallah hills with Raja Shehadeh. We got on the bus and headed through the Wall and Qalandia checkpoint and north to Raja’s house. After a brief introductory talk we took the bus out to middle of a valley – to the start of a walk Raja had chosen that would keep us as out of of sight of the army and the settlements as possible.
The walk was slightly more challenging than people had been expecting – we dropped down into the valley then slowly scrambled up the other side, finally reaching a qasr: a solid16th century stone structure that used to house workers and crops during the summer agricultural months.
We moved back down and through the valley to reach the village where the bus was to pick us up. On reaching the outskirts, we fanned out on to the new tarmac in front of us. But we are quickly called back, behind a barn. An Israeli watchtower looms on the crest of a hill in the distance and we are advised to stay out of its sight.
We had a few problems checking in to the hotel, as seems to happen rather too frequently in Ramallah , but managed it eventually and people headed to the home of Dr. Saleh abd el-jawwad and Islah Jad for drinks in their garden before moving to the Sakakini Centre.
The night’s event was held in the garden of the centre, and though it was a windy at times, it is a wonderful setting. The night passed with an atmosphere of calm and ease that had been so missing in Jerusalem, and as with the combined comedic forces of Michael Palin, Suad Amiry and Carmen Callil it was a night that brought us back to feeling like a literature festival. This night didn’t insist on being dominated by Israel and by occupation. Though they are never far away, just having the choice of when to talk about them felt empowering. Which shows just how totally consuming, mentally, this occupation is.
# posted by umkahlil @ 8:45 AM