His Name Was Basem 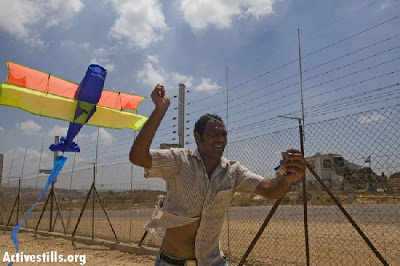 From Bil'in, A Village of Palestine 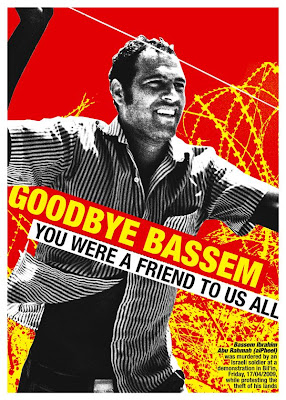 His name was Basem, which means smile, and that is how he greeted everyone. But we all called him ‘Pheel’, which means elephant because he had the body the size of an elephant. But Basem had the heart of a child.

He loved everyone, and because of his sweetness and ability to make us laugh, everyone loved him. Basem was everyone’s friend: the children talk about how he would play with them, scare them and then make them laugh. He would tend the garden in the playground and bring toys and books to the kindergarten. The old ladies in the village talk about how he used to visit, to ask after them and see if they needed anything. In the village, he seemed to be everywhere at once. He would pop in to say hello, take one puff of the nargila, and be off to his next spot. The morning he was killed he went to the house of Hamis, whose skull had been broken at a previous demonstration three months ago by a tear gas canister projectile - the same weapon that would kill Basem.
Basem woke Hamis and gave him his medicine, then off he went to visit another friend in the village who is ill with cancer. Then a little girl from the village wanted a pineapple but couldn’t find any in the local stores. So Basem went to Ramallah to get a pineapple and was back before noon for the Friday prayers and the weekly demonstration against the theft of our land by the apartheid wall. Pheel never missed a demonstration; he participated in all the activities and creative actions in Bilin. He would always talk to the soldiers as human beings. Before he was hit he was calling for the soldiers to stop shooting because there were goats near the fence and he was worried for them. Then a woman in front of him was hit. He yelled to the commander to stop shooting because someone was wounded. He expected the soldiers to understand and stop shooting. Instead, they shot him too.
People came to his funeral from all the surrounding villages to show Basem that they loved him as much as he had loved them. But those of us from Bil’in kept looking around for him, expecting him to be walking with us.
Pheel, you were everyone’s friend. We always knew we loved you, but didn’t realize how much we would miss you until we lost you. As Bil’in has become the symbol of Palestine’s popular resistance, you are the symbol of Bil’in. Sweet Pheel, Rest in Peace, we will continue in your footsteps.
— Mohammad Khatib, member of the Bil’in Popular Committee Against the Wall and Settlements