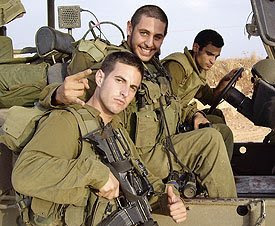 Although we are proffered one self-righteous Zionist after another who assure us that there is no humanitarian crisis in Gaza, the history of the inhumane actions with which the Zionists have plagued the Palestinians, who are a voiceless people in the words of the heroic Norwegian Dr. Mads Gilbert, belies the unctuous drivel their war criminal leaders and proponents in the media spew. Americans should be outraged that American born Steve Rubin is free to be a dual citizen of both the US and Israel. For him this privilege of dual citizenship, denied to just about anyone else in the world, is not enough. For him the privileges that a carrier of an American passport holds is not enough. He's got to get in a few Palestinian dead babies to warrant that jock smirk on his face.

"American-born Steve Rubin (left) said that making aliyah wasn't enough -- he had to join the Israel Defense Force to really feel like a sabra."

Sorry to break it to you, buddy, but you'll never be a so-called "sabra." A "sabra" is merely a Jew who was born in Palestine, i.e., the son or daughter of an immigrant from Poland, Russia, France, the US. We certainly didn't glorify the sons and daughters of Afrikaaners, who never even thought about inflicting upon the indigenous people of South Africa the horrors in the Zionists' arsenal of atrocities.

The true heirs of the land are the Palestinian people, which is why Zionists have gone out of their way to pulverize them either into subservience or when that doesn't work, non-existence. So if you want to call anyone Sabra, save it for the Palestinian Arabs. Immigrant Jews from the US, Europe, South America, in spite of the fact they've managed to raze 531 Palestinian villages to the ground, have no more "right" to Palestine than the Absynnians, who once ruled Palestine. Or the Egyptians. Or the Mamelukes. Most definitely not the American Jews from New Jersey. No matter how much hummus you appropriate as your own. No matter how many name changes from "Gruen" to Ben-Gurion you make.

Below are pictures of the devastation Zionists like American born Steve Rubin have wrought: refugees from 1948, 1967, and 2009. The sad and unique fate of the refugees in Gaza is that they have no where to flee; they are in the words of Israeli war criminal Rafael Eitan like "drugged cockroaches in a bottle." Although Steve Rubin and his fellow Zionists have no compunctions regarding their ongoing destruction of Palestinian life and culture and their wholesale theft of Palestinians' properties, it is clear that it is a matter of time before they will have to account for their egregious criminal inhumane actions against the Palestinian people before an international tribunal. 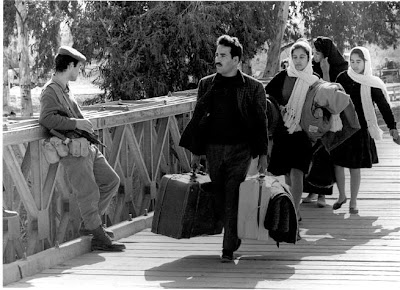 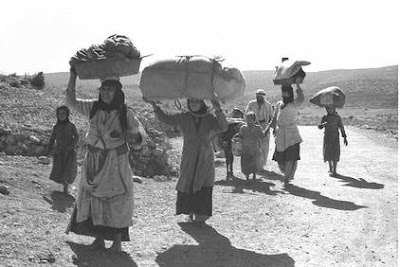 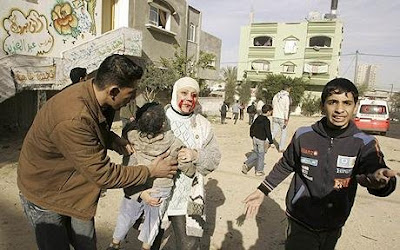 Palestinians ethnically cleansed from Galilee to Lebanon on October, 1948