'This is one Child. One Story' 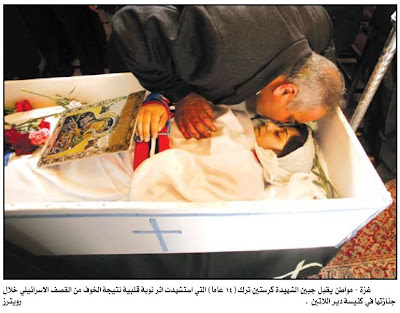 From Sam Bahour in Ramallah
Dear friends,
The attached photo was published in Jerusalem's Al-Quds Newspaper (Jan 4, 2009) - the caption reads:
Gaza - During her funeral in the Latin Patriarchate Church, a citizen kisses the forehead of the martyred Christine Turok (14 yrs old) who was martyred due to a heart attack from fear of the Israeli bombardment. (Reuters).
In a phone conversation today, from Gaza the Latin Patriarchate Church priest, Father Manaweil Musallam, clearly shaken, said, "her name is Christine, a tenth grade student. Her father is a doctor and she lived near the YMCA in Al-Remal area. She died of fear. Since the war started she felt apprehensive of the danger. She suffered from neurotic disorder and a hysteric situation just as many children are suffering. On Friday, during the shooting of F-16 missiles, she fell on the ground due to the dreadful sound. Her father tried to help, but he couldn't. Then he held her in his arms hoping to rescue her in the hospital, but she died before reaching there."
He continued, "the Latin Patriarchate school [where Christine attended] did not face any damages, however, the Rosary Sisters School did face physical damages, since it is located near to the Preventive Security building. Today, no one attended Sunday Mass, no one was able to reach the church...we tried to find an alternative place in the school to do the prayers...I tried to gather the nuns with my own car. Today, the area in which the church is located was shelled, we cannot go there."
Being part of the Greek Orthodox Church, the other congregation in Gaza, means that Christine and her family were looking forward to celebrating their Christmas on January 7th. Instead, they will bury Christine at a time where funerals are a rare commodity, for Gazans cannot keep pace with the mounting dead.
This is one child. One story. There are hundreds more and yet hundreds more about to happen tonight, and tomorrow, and the next day...until this madness ends. When the dust settles and the all the dead are buried, some in mass graves, Gazan's children will return to their overly crowded classrooms to find many empty seats. Another Palestinian generation is being destroyed by Israel's killing machine. The US cares less. The UN cares less. The EU care less. The Arab League cares less.
Palestinians are depending on themselves and all those grassroots solidarity communities around the world to weather this madness.
Christine, farewell. I never met you but love you like I love my 14-yr old daughter Areen nevertheless. Christine you lived 14 years in constant fear. I apologize that I, and the world, could not act swiftly enough to bring you a normal life, a dignified life.
Christine dear, you are one of the older ones to be killed and we need you to be brave to look after all those young children and infants being sent your way by US-supplied Israeli weaponry.
May you rest in peace and find yourself in good company with all those other children. Please look after them and yourself.
You will never be forgotten. Never!
Sam
# posted by umkahlil @ 10:30 PM