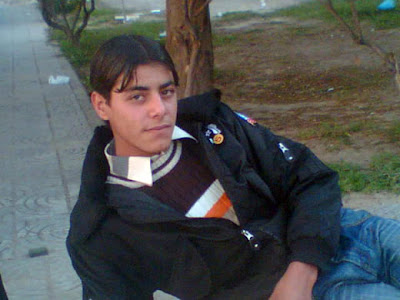 When I saw the photos of the slaughtered Palestinian children in the Guardian's photo gallery and when I read Rory McCarthy's story,
I thought of Samia Halaby's MEMORIAL on the 50th Anniversary of the Kafr Qasem Massacre.

"Adham Mutair (large photo), 17, was shot by Israeli troops at his home near Beit Lahiya, in northern Gaza, on 9 January. Israeli tanks had taken up positions in the area around the houses and the family had been trapped inside their home for a week. Adham went upstairs to the roof to check on their pigeons, which were housed in a large hut. As he stepped out into the open, he was shot three times and collapsed. Two of his brothers carried him out of the house along a back route. Using a motorcycle and then a car, they carried him to the Shifa Hospital in Gaza City. He died the next day. Most of the family could not get out of the house to make it to the burial. 'We haven't even had a chance to set up a funeral tent to mourn him properly,' said his uncle, Khader, 53. 'I don't think the rest of the world understands how painful our lives are here.'" Rory McCarthy in "Child casualities of Israel's War on Gaza."
Pictured in the small photo is Abdalkarim Salim Nuwwara Freij, 14 years old. He died in the seventh wave of the Kafr Qasem massacre in 1956.
From Palestinian artist Samia Halaby
"Fifty years ago, on October 29, 1956, 49 Palestinian residents of Kafr Qasem were murdered by Israeli border police who at that time were officially attached to the military. Countless more were wounded and left bleeding and unattended. Their families were unable to offer aid because of a 24 hour curfew lasting for some two days and three nights. Violation of the curfew was punishable by death. In the following two days (while the families were thus imprisoned in their homes) the Israelis unceremoniously buried the victims without permission, or the presence of witnesses. On the following morning, the unattended wounded who had helplessly lain in the streets were torn away from their deceased loved ones, thrown into trucks (not ambulances) and hauled off to hospitals. This deliberate massacre had been planned in advance to coincide with the Israeli and Anglo-French attack on the Suez canal."
See also Children of Gaza: Stories of those who died and the trauma for those who survived.
# posted by umkahlil @ 3:30 AM