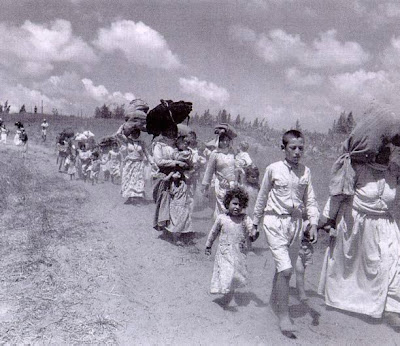 Photo from 1948 and photo from January 2009. Zionists aren't shocked and dismayed when they destroy villages and raze houses 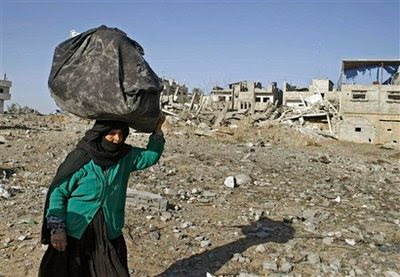 and make Palestinians refugees many times over. Their shock and dismay is reserved for statements by Cardinals.

Oh mercy me, Israel is "shocked and distressed" over Cardinal Renato Martino's statement that Gaza "now resembles 'a big concentration camp.'" No doubt the holy men of the Vatican will now fall all over themselves in order to placate the Eastern European Zionist butchers who nurture such tender sensibilities when it comes to such unkind cuts about their murderous, bloodletting Zionist project that one would think they are innocent pre-pubescent choirboys.
Oh, these contemptible home-wrecking practicioners of ethnic purification who have a track record of slaughtering families wholesale, razing villages to the ground and shooting anyone who dares to return; these monsters who put typhoid in wells and mete out death to children on a daily basis are shocked at the Cardinal's utterances!
How hypocritical that the self-righteous blond bombshells that the country parades in the western media to justify child murder, school bombings, limb amputations, starvation, dehydration, medic killings, ambulance shelling, land stealing, village razing, prattle on that these Nazi comparisons are so heinous because six million haven't been killed, yet justify killing over eight hundred Palestinians, including almost two hundred children, in two weeks for a handful of Israelis by these rockets in ten years! So, why can't Palestinans say, well, only a few Israelis have died from the rockets; why does that give you carte blanche to burn the government builidings, kill people sheltering in schools, bring down homes with people in them? Yet, God forbid anyone compare the Eastern European Zionist to a Nazi because they haven't managed to kill six million Palestinians yet (not that they haven't tried), but thousands of civilians in Lebanon were bombed for a couple of immigrant soldiers. And one French immigrant soldier is a lot more newsworthy and otherwise worthy than are 650,000 Palestinians who have seen the inside of Israeli prisons.
Although the Israelis are shocked and distressed over the Cardinal's comments, they will most asssuredly get over it as their shock and dismay is most assuredly mitigated by the pleasure and joy that comes from Palestinian carnage.