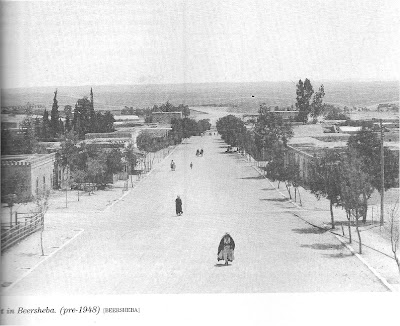 Photo of Bir Saba (pre-1948) scanned from Walid Khalid's All That Remains: The Palestinian Villages Occupied and Depopulated by Israel in 1948
From "The Darker it is, the Closer We are to the Break of Dawn," Rafat Abu Ghali - Al-Shabora refugee camp, Gaza Strip,Occupied Palestinian Territory
My family’s name is Abu Ghali and my family comes from Bir Saba. We used to own 48,000sq meters of cultivatable land. People used to cultivate their land in winter and move to another area called Sidna Ali, near Jaffa. There, they used to rent land lots and cultivate them. During the harvest season they would go back to Bir Saba. In 1933, the British came and expelled the Arabs from Sidna Ali in order to settle Jewish immigrants on their lands. They offered compensation to the land owners. The compensation was one camel, twelve cans of oils, and 20,000sq meters of land with a house built on it in Moqibla area near Jenin. Most people accepted the offer, among them was Khalil Abu Ghali, my grandfather. Those who rejected the offer were expelled by force. A Jewish settlement called Kabus was built there.
The Zionist schemes started in Tel Aviv and Jaffa. Arab owners understood the real intention of these schemes; they were offered two-storey houses built on Palestinian lands. According to the plan, the ground floor was to be occupied by Palestinian land owners while the first floor was for Jewish immigrants. When violence erupted, the Jewish residents started firing from the first floor on their Palestinian neighbors. The British did not allow Arabs to own guns, but they provided weapons for the Jews.
Read more to understand the history and context of the Zionist continuing assault on Palestinian civilization
# posted by umkahlil @ 3:55 AM