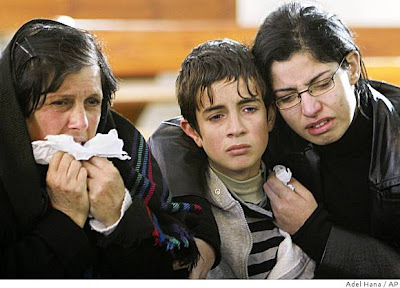 Mourning Wassem Saba, 22, a Christian victim of the Israeli Gaza offensive, at the Latin Catholic Church.
Stories from three Palestinian reporters in Gaza, a Palestinian reporter from Gaza currently in the US, and a final excerpt from UCLA Professor Saree Makdisi:

A compelling story by AP reporter Ibrahim Barzak with concrete details about the destruction of his hometown. Today Orthodox Christians in the Middle East celebrate Christmas. Barzak visited his friend, Orthodox Christian Eyad Sayegh Tuesday:
"On Tuesday, the only shop I found open was the Shifa pharmacy run by my friend Eyad Sayegh. He's an Orthodox Christian, and I stopped to wish him a Merry Christmas — Eastern churches celebrate Christmas on Wednesday.
"Eyad told me he forgot it was Christmas."
Barzak begins "I live alone in my office. My wife and two young children moved in with her father after our apartment was shattered. The neighborhood mosque, where I have prayed since I was a child, had its roof blown off. All the government buildings on my beat have been obliterated.
"After days of Israeli shelling, the city and life I have known no longer exist."
Read more
From Laila El-Haddad:
The anchor asked why my mom and father were still in Gaza City. He replied it was his home, and no one would kick him out of it. I emphasized that even for those who did want to flee for safety, there was no where to flee to- the borders are hermetically sealed, the sea and sky under total blockade.
"Is there anything you'd like to tell your daughter?" the anchor concluded by asking.
"What do I tell her? I honestly don't know if I'll live from one hour to the next," my father replied. "She keeps asking me to describe the casualties for her that I'm seeing; but I can't. What should I tell her? That I've seen bodies with my own eyes reduced to nothing more than pieces of black flesh?"
From Reporter Rami Almeghari's "A Dad, a Refugee, and a Reporter in Gaza":
"The most important thing that I need is to keep up, whatever pressure I am facing. I am a Palestinian in Gaza who lives the situation minute-by-minute. Israel has denied international reporters access into Gaza, so I need to do what I can to get information out . . .
"Today I can file, I can have my voice and the voices of others heard in the US. But who knows if these voices will still be heard tomorrow.
"Journalist Fares Akram's blog for the Independent. Fares' father was killed by the Israelis as he walked to the gate of his family farm. Right now, I'm not able to access his blog, but there is a link to it on the Independent's main page, which may work later. His entries are beautifully written and despite being separated from his pregnant wife and the recent death of his father, he continues to write.
In spite of their personal suffering, these Palestinian reporters continue to report to the world the situation in Gaza. Their tenacity and resiliance is admirable and their steadfast efforts attest to the conclusion that Saree Makdisi draws in his brilliant "By Choice They made Themselves Immune": 'This inhuman madness will end only with the end of the violent ideology that spawned it -- when those who are committed to the project of creating and maintaining a religiously and ethnically exclusivist state in what has always been a culturally and religiously heterogeneous land finally relent and accept the inevitable: that they have failed.'"
Inevitably, the proponents of Zionism will fail. Any project that kills, maims, injures, destroys and abuses language to sustain itself is destined for oblivion. "My grief carries no desire for revenge, which I know to be always in vain," writes a grieving Fares Akram, two days after the death of his father. Ibrahim Barzak wanders the streets of his hometown, Gaza City and passes the Latin Patriarchate School his father used to walk him to every day. It still stands.
"I reached the Catholic Latin Patriarchate School I attended, where my late father _ also an AP correspondent _ used to bring me every day. The building was undamaged.
"I stood in front of it, wondering if I will ever be able to walk my children to this school."
I am confident that he will.