Israel Continues Its Sixty Year Plus Genocide Against Palestinians 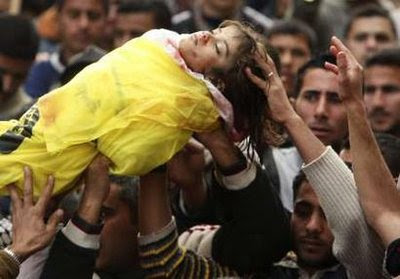 Palestinians carry the body of 4-year-old Lama Hamdan during her funeral in the town of Beit Hanoun in the northern Gaza Strip December 30, 2008. Israel on Tuesday rejected any truce with Hamas Islamists in the Gaza Strip before cross-border rocket fire ceased and said its air strikes, the fiercest in decades, heralded "long weeks of military action". In Beit Hanoun, two sisters, one of them Lama Hamdan, were killed in a air raid as they were taking out the trash near their home, medical workers said. Reuters/Mohammed Salem
# posted by umkahlil @ 12:29 PM