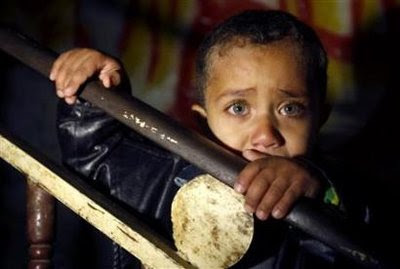 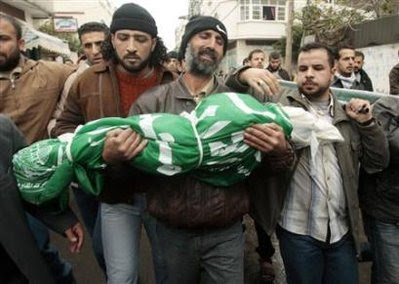 A Palestinian man carries the body of his 4-year-old daughter Dena Balosha during the funeral for her and her four sisters in Jabalya refugee camp in the northern Gaza Strip December 29, 2008 (Mohammed Salem, Reuters).
Five of this man's daughters were murdered by Zionists.

How hard it is to look at the TV. I'm a school teacher, but when I watched CNN's "Putting Gaza in Context" yesterday I hurled expletives that wouldn't be tolerated in a bar. While the fresh-faced engaging young man put Gaza "in context" for us, he failed to mention that 44.7% of Gaza's population is fourteen years of age or under (thanks, Annie, for that fact from the CIA factbook). Instead he told us that Israel was engaged in a war with Hamas militants. Tell that to the father who carried his dead seven year old son in a cardboard box. And tell us why this monstous faux country bombed a defenseless refugee population at high noon, when school was getting out. (And for comprehensive coverage of Israel's latest in a long line of massacres against the Palestinian people check out Annie's blog).
He did tell us that Israel ended its occupation of Gaza in 2005, leaving the ignorant viewer to wonder just why the Palestinians there are so unhappy with Israel, the plucky nation of immigrants, self-described as the "light unto the nations." Well, at least no one buys that bull any more. He also didn't put in context that most of the residents were ethnically cleansed from their villages, which were bombed to oblivion in 1948 by the immigrants from Poland, Russian, and the US, nor did he mention that the people in Sderot live in ethnically cleansed and courtesy of Israel defaced Najd. We hear a lot about Hamas this, Hamas that, Hamas hospital, Hamas University, Hamas school, Hamas day care, Hamas house, Hamas mosque, Hamas civil defense building, Hamas neighborhood, ad nauseum.
There are a lot of nasty and not so nasty commentators on the Guardian's Comment is Free, but no one really gets to the heart of the matter. Except for Ali Abunimah who wrote "We Have No Words Left." Well, we have words, but no words in the English language to describe the despicable way that Zionists have vilified their victims for over sixty years and turned this story on its head unless our words are reduced to the basic Anglo-Saxon expletives hurled at the TV for the disgust we feel for how our suffering is portrayed and for the indifference to our plight from the Zionists and much of the world. Actually, the indifference is better than the insidious Zionist lie after lie after lie that saturate the comments boards and the media. The Israeli Zionists want a state "for the Jews, of the Jews, and by the Jews," and damn everyone else.
The Zionists spit on international law and human rights. Zionists, no matter from where they come in the world, don't give a damn that they deny the right of return to hundreds of thousands of Palestinian refugees. They happily immigrate to their faux country, indifferent to the natives they ethnically cleansed and to the villages they eradicated. They have no concern that by immigrating to Israel they are collusive in an ongoing genocide of a people and their culture. They bombed and eradicated over five hundred villages to ensure that the refugees wouldn't return home, and those who tried back in the fifties were gunned down by the vicious predecessors of today's Zionists.
Any other people would have the world's sympathy, but sympathy or not, at least I'm not going away, and I will resist the evil manifested by the despicably racist Zionist movement consisting of a host of invaders from all over the world, who for sixty long years have denied the Palestinians' their inalienable right to live peaceably in their homeland.
Stop your killing, stop your lies, your insidious, despicable lies about the people for whom Palestine is home, the true heirs of the land. Go back from where you came, Zionist Jews from Poland, from Russia, from France, from South America, from the US, from Canada, from Germany, from Ethiopia, from wherever you decided to leave, or else resolve to live in peace with the indigenous people of Palestine.