Present and Past Palestinian Autumns 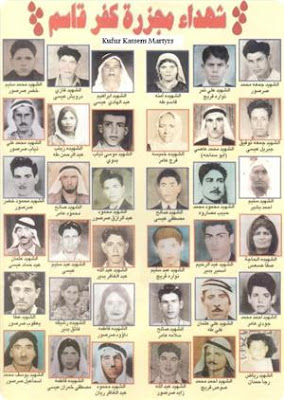 Just remembering today, a miniscule sampling of the effects of Zionism on present and past Palestinian autumns
Victims of Kufur Kassem: A Past Zionist October Surprise

Nine-year-old Aya said she was terrified. "The lights were all off, there was water everywhere. My mother was crying. She is pregnant and the baby will come soon. Please get us out before my brother is born. I am scared he will die if we have to live here after she delivers."

Palestinians Denied Visit to Villages of Ancestors (Since 1948-present)

“He was killed 60 years ago as he was travelling to work,” she said, struggling to hold back the tears. “My mother was four months pregnant with me at the time. This photograph is the closest I’ve ever got to him.” Six decades on from his death, she has never been allowed to visit his grave in Galilee and lay a wreath for the father she never met.

They told PIC that Mohammed Abahra was instantly killed when the IOF soldiers fired at him after he got out of his house with a lamp in his hand to inspect the noises he heard in the vicinity.

October 29, the 52nd Anniversay of the Kufr Qassim Massacre

A group of women gathered around me. Each of them is trying to tell her piece of the story. Nisreen, Nema's daughter, explained that "My mother, Manal, and Fatima Masoud, the three of them turned to piles of burnt and torn flesh. We collected what was left of them from the walls, doors and trees, and then put them in buckets carrying their names. We recognized them from pieces of their clothes which were stuck to their burned flesh."
# posted by umkahlil @ 7:22 PM

There is the matter of the land
And who thereon may squat--
O Israel, Israel, stay thy hand:
What kind of hold you´ve got.

It is possession very hard,
So hard to keep maintaining,
Yet also dangerous to discard
Wherefore so much disdaining.

Ah, such a great Democracy!
Yet we grow paralyzed
As voters ineffectively
Protesting wars devised.

Forty-to-one in Palestine,
Yet even one is sacred:
The soul must taste a bitter brine
Of sorrow pungent, acrid.

The only rational solution is the utter extermination of all Jews everywhere. Today our brothers in India struck a great blow.