Candidates Fall Over Themselves With Fealty to Israel 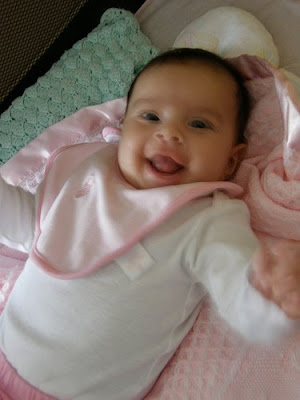 Our Anna Banana, a little Arab-American

She is. Thank you.

Woman at rally: I don't trust Obama. I have read about him and he's an Arab.

Sen. John McCain: No ma'am, no ma'am. He's a decent family man, citizen that I just happen to have disagreements with on fundamental issues. That's what this campaign is all about.

He's not, thank you.

"Barack Obama has claimed that nobody has suffered more than the Palestinians," says Randy Scheunemann, John McCain's senior foreign policy adviser, in an effort to show that Barack Obama doesn't exhibit sufficient fealty to Israel.

Israel made itself more secure today by stoning kids on their way home from school.

For the week of September 25-October 8 Israel made itself more secure by treating the non-suffering Palestinians to the following:

Israeli settlers killed a Palestinian civilian in near Nablus.

16 Palestinian civilians, including four children, and a Scottish human rights defender, were wounded by the IOF gunfire.

Nine of the wounded were wounded during peaceful demonstrations against the construction of the Annexation Wall.

IOF conducted 38 incursions into Palestinian communities in the West Bank.

IOF arrested 59 Palestinian civilians, including 13 children and a woman.

IOF arrested 2 Palestinian civilians near the border between the Gaza Strip and Israel.

IOF have continued to impose a total siege on the OPT and have isolated the Gaza Strip from the outside world.

IOF imposed a comprehensive closure on the OPT for the Jewish Kipurim festival.

IOF held a number of journalists near a settlement in the West Bank.

It seems to me that Americans have good cause to question the commitment to American values that our presidential candidates possess when they fall all over themselves expressing fealty to a country that exhibits anything but "decency" when it comes to respecting the human rights of the people its occupied for forty years and the people its been dispossessing for over sixty years.

Comments:
What a beautiful baby!!!