The Unbearable Darkness of Being A Palestinian Untermensch 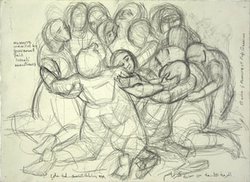 Samia Halaby's drawing of the women of Kafr Qasem's "embrace before death," from the depiction of the killings during the ninth wave of the 1956 massacre perpetuated by Zionist immigrants.

The "cool" Zionists (that's an example of an oxymoron) whose blogs are the latest in Israel's hasbara get indignant when one uses Nazi analogies for Zionists. They also get all huffy when one says Israel has no right to exist as a Jewish state and bat off their stock mantra: Why can't Jews have their own state when everyone else does, disregarding that the Jews stole Palestine from its indigenous inhabitants, and then lied and covered up the atrocities committed.

Actually, since the Zionist onslaught has been ongoing for one hundred plus years now, perhaps comparison to Nazis, who perpetuated evil for a much shorter duration than the Zionists, is not entirely accurate.

Zionists do compete with Nazis in their views on untermenschen. Jewish supremacism is every bit as toxic as Nazi notions of German superiority. What else explains the malicious barbarism of these bigoted immigrants toward the land's indigenous inhabitants? Daniel McGowan, the director of Deir Yassin Remembered, in a recent story for Counterpunch, quotes Elie Wiesel, "Auschwitz cannot be explained nor can it be visualized.... The Holocaust transcends history.... The dead are in possession of a secret that we, the living, are neither worthy of nor capable of recovering.... The Holocaust [is] the ultimate event, the ultimate mystery, never to be comprehended or transmitted." (Elie Wiesel, "Trivializing the Holocaust," New York Times, 16 April 1978.)

Yet, Elie Wiesel, who has made a career expounding upon the Holocaust and extolling the virtues of the Jews privileged state (even working as a journalist for the Stern Gang, responsible for the Deir Yassin massacre), has neither an explanation nor any comments re the "transcendence" for the horror that Jewish supremacists have inflicted on hapless Palestinians in the past and in recent days.

For a look at Zionim's bitter harvest in Palestine read and look at Palestinian artist Samia Halaby's brilliant and harrowing commemoration of the 1956 massacre of Kafr Qasem. What follows is a small excerpt:

"The Israeli men begin shooting at the Palestinian women and the women sought comfort in each other. Then something happened which affected everyone. The women grouped together into one embrace and began to slowly turn as the bullets struck them. The Israeli men were without mercy, bent on killing each and every one, leaving no wounded. According to Kafr Qasem residents, the 16 year old Hana Amer was in the middle and could hear the bullets thudding on the women. One after another the women and girls all fell in one place at which time Hana, wounded and bleeding fainted. There she remained till the following day when she spoke up as they were removing the dead.

"Sometimes, I think about these wounded victims who spent the night bleeding among the dead bodies of their family and friends. I consider how those hours etched themselves in momories, changing for all their futures the way they perceive their painful exhistence in the reality of Israel and the Arab states."

"While bleeding and suffering from multiple injuries, Mr. Khalil Hamad had to wait for special arrangements and an army permit to transfer him via the Red Cross from outside the village to the nearest hospital (Al-Awda), five minutes away from the scene. Mr. Hamad bled to death before he arrived at our hospital.

"I was told by the surgeons that the injuries were all serious -- to the neck, abdomen, head, and lower extremities -- and were caused by large-sized bullets."
Dr. Mona El-Farra

And for more of yesterday's mind numbing barbarity, view this video of the Nazis' heirs shooting the brave women of Beit Hanoun.

And the carnage and horrors are ongoing. This is today:

"For the fourth consecutive day, Israeli Occupation Forces (IOF) continue their land incursion on the town of Beit Hanoun in the north of the Gaza Strip. This attack comes as part of an IOF operation codenamed "Autumn Clouds." The number of victims has increased to 34 killed, including 21 civilians that include 7 children, 2 women, and 2 paramedics. The injured are 150, most of them unarmed civilians, including approximately 40 women, 40 children, 1 paramedic, and 1 journalist."

" . . . dozens of residents appealed rescue teams to locate the body of another resident who was also burred under the rubble of one of the houses in Beit Hanoun. The residents is from Adwan family, he was killed more than 36 hours ago."http://www.imemc.org/content/view/22456/1/

Israeli forces broke into a school and threw tear gas cannisters at the children and refused them access to ambulances.

Two brothers, Issa and Ali Naouq, have been killed by Israeli snipers in the Abd Rabbo area of the Gaza Strip.

Deir Yasin, Kafr Qasem, Beit Hanoun. What manner of man kills women embracing before death, kills unarmed women on the street of their own town, throws tear gas cannisters in a school room and then denies ambulances access, watches men bleed to death, demolishes a house with people inside? What manner of men are these Zionist rapists and murderers, these whacked out uebermenschen who smear their feces on Palestinian walls, who demand the acknowledgment from their victims, the Palestinians, whom they view as untermenschen, of their barbaric state's "right" to exist?