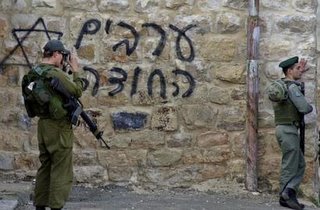 Israeli Prime Minister Ehud Olmert has been holding talks with the extremist right-wing Israeli politician Avigdor Lieberman in an apparent effort to get him to join the government, substantially weakened by the recent war with Hizbullah.

Lieberman, a former cabinet minister and ally of former Israeli Prime Minister Benyamin Netanyahu, is the head of the Yisrael Beitenu ( Israel is our home) party , considered one of the most openly fascist political parties in Israel .

Israeli press sources have revealed that Olmert held talks with Lieberman on Friday, 6 October with the main topics centering on Lieberman’s demands for a substantial transformation of the Israeli political system.

The Israeli newspaper Ha’aretz reported that both Olmert and Lieberman agreed to back a bill to make changes in the Israeli political system when it will be submitted to the Knesset for a preliminary reading.

During the meeting, which reportedly was arranged at Olmert’s request, both viewed favorably the prospect of Lieberman’s party joining the government.

In recent weeks, it was widely rumored that Olmert might ask Lieberman to assume the portfolio of defense in case the Labor Party, headed by the current Defense Minister Amir Peretz, decided to quit the government.

Ha’aretz, quoting sources close to Kadima party (Olmert’s party) described Lieberman as an “attractive coalition partner” who is interested in joining the government.

Lieberman has been calling for the adoption of a “presidential system” that would very much look like America’s form of government.

Lieberman also reportedly advocates a “constitution” that would sanction and institutionalize the official Israeli state policy of discrimination against non-Jews.

The possible inclusion of Lieberman’s party to the government indicates that Olmert is determined to keep up the present slow-motion genocide against the Palestinians as well as creating more “facts” in the West Bank by building more and more Jewish-only settlements in the territories occupied in 1967.

Israel has been barring Palestinians in the Gaza Strip and to a lesser extent in the West Bank from accessing food and work, resulting in the severest humanitarian crisis since 1967.

It also underscores Olmert’s half-declared intention to abandon the so-called “convergence plan,” the centerpiece of his election campaign.

The plan, which Olmert said following the recent war in Lebanon it was no longer a national priority, stipulated the removal of some small colonies in the West Bank in return for the consolidation and annexation into Israel of the largest settlement blocs.

Lieberman has a long record of adopting fascist, even Nazi-like, attitudes and positions vis-à-vis the Palestinians and other Arab and Muslim nations in the region.

While minister in the Israeli government of Ariel Sharon in 2002, he proposed carpet bombing for Palestinian streets, malls, banks and other public facilities in order to force as many people as possible to flee their homeland.

He also advocated the bombing of the Aswan High Dam in Egypt and Tehran . In recent weeks, he urged Israel to bombs Iran with nuclear weapons if necessary.

His party’s platform calls for the expulsion and disenfranchising of Palestinians, both from Israel and the occupied territories of 1967.

Lieberman’s views, which would readily qualify him as a neo-Nazi in any European country ( Austria ’s Jorge Haidar’s views seem so innocuous when compared to Lieberman’s), are non the less representative of the general ideological trends among the Israeli Jewish populace.

Last week, Amir Peretz admitted in a radio interview that the Israeli Jewish public was moving steadily toward right-wing chauvinism.Olmert, substantially weakened by the recent war, is coming under mounting public pressure to form an official commission of inquiry to look into Israeli failures in the war with Hizbullah.

Olmert has been resisting demands to this effect, opting for superficial probes with no authority to sack officials.It is likely that Olmert is feeling increasingly politically insecure in the absence of a clear political program and following the mediocre outcome of war with Hizbullah.

If so, the not-so unlikely inclusion of Lieberman’s party, the third largest in Israel , into the government would consolidate a safe parliamentary majority in the government’s favor.

However, the presence of Lieberman in the government would most certainly take it even farther to the right with the possibility of transforming it into the most extremist right-wing government in Israel ’s history.

Indeed, if Lieberman should become Defense Minister as he has been demanding, especially in the aftermath of the war with Hizbullah, wholesale massacres of Palestinians in Gaza and the West Bank wouldn’t be a far-fetched possibility.

In this case, Shaul Mofaz and Amir Pertez, both of whom can be considered war criminals for their direct involvement in the murder of thousands of innocent Lebanese and Palestinians as well as the utter destruction of civilian infrastructure in Gaza and Lebanon, would look like scout boys in comparison to what Lieberman is capable of doing.

Lieberman could also embark on a real military adventure against Iran with or without American consent.