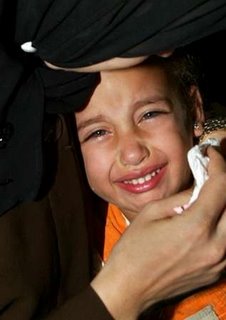 More Family Grief. Azah Hamad's sister at her funeral. Azah, 14, one of 89 Palestinian children seventeen and under killed by Israel's occupation forces this year.

from Khalid Amayreh in occupied Palestine

While human and living conditions in the concentration camp the Gaza Strip has become due to criminal Israeli cruelty has not reached the genocidal benchmark, there are serious indications that Gazans are literally starving by the hundreds of thousands.

This is evident from the already numerous Gazan children fetching for food in garbage containers or begging for food and money on the streets.

Israel, now for the seventh consecutive month, is simply barring the 1.4 million Gazans from accessing food and work and clean drinking water, pushing more than three quarters of Gazan families to real starvation.

This catastrophic situation had been planned carefully by the Israeli government for the purpose of forcing Palestinians to stop their struggle for freedom from the decades-old Nazi-like Israeli military occupation.

A high-ranking Israeli government official, Dov Weisglass, earlier this year publicly spelled out the cruel goal of starving the Palestinians.

“It is like an appointment with a dietician, the Palestinians will get a lot thinner, but will not die,” said the Nazi-minded Israeli official.

Unfortunately, his callous remarks, which, interestingly enough, were met with broad smiles from Jewish leaders in Israel and abroad, sounded no alarm in the capitals of the “democratic and civilized West” which soon sought to emulate Israeli cruelty by clamping down a draconian blockade on the suffering Palestinians.

Moreover, the Israeli army has been refusing to allow the opening of the Rafah border crossing with Egypt, Gaza’s only exit to the outside world , thus reducing the Gaza Strip, the most heavily populated spot on earth, to a real claustrophobic detention camp.

The officer, who spoke with the Israeli army radio, Gali Tzhal, pointed out that Israel was succeeding in tormenting and debilitating Gazans and other Palestinians by starving them and preventing them from accessing food as well as depriving them of the ability to purchase food.

“This way we score two hits, first we starve them really but silently and second we don’t have to worry about an outcry by the international community because the world reacts only when starvation becomes famine and people die by the thousands as in some African country.”

Unfortunately, the Israeli army officer’s predictions with regard to the faintness and gutlessness of international reactions to the tragedy in Gaza are already being vindicated.

Palestinians in Gaza (and also in the West Bank) are already dying and will be dying in great numbers not only from malnutrition but also from lack of medical care and lack of sanitation, especially after the Israeli air force bombed and destroyed Gaza’s only power station, plunging the area into darkness.

The bombing of the power plant, a war crime by every conceivable standard, has had devastating effects on all walks of life in Gaza, including hospitals and other basic services. It is widely believed that hundreds of Palestinians, including children, have already perished due to complications resulting from the destruction of Gaza’s main power station.

This week, John Dugard, Special UN rapporteur on human rights in the occupied Palestinian territories, told international body’s Human Rights Council that Israel had already turned the Gaza Strip into a prison for Palestinians and that life there was already becoming intolerable.

“In other countries this process might be described as ethnic cleansing but political correctness forbids such language where Israel is concerned. If the international community cannot take some action, it must be surprised if the people of the planet disbelieve that they are seriously committed to the promotion of human rights.”

Dugard said the US, Europe and Canada had failed the Palestinian people by withdrawing funds in order to punish Palestinians for electing Hamas in thelegislative elections earlier this year.

In truth, Israel is turning Gaza into more than just a prison, it is turning it into a real concentration camp where the 1.4 Gazans, a majority of them children, are confined to 300 square kilometers, without food, without money, with work and certainly without hope.

Well, the shipyard dogs of Zionism and their supporters will cry out in protest that there are no gas chambers in Gaza. This is true. There are no gas chambers yet, but Israel doesn’t need ovens to kill Gazans and other Palestinians since this would be a huge public relations disaster for the children and grandchildren of the holocaust.

Hence, a “wiser” way to attain the same results, annihilating the Palestinians, lies in starving them to death or to near death as Weisglass had suggested.

It is very hard to understand why countries like France, which had experienced the horrors of German Nazism, is saying nothing and doing nothing while 3.5 million Palestinians are dying a slow death at the hands of Zionist Nazism.

It is also mind-boggling that the more humane countries in northern Europe are also effectively silent in the face of this silent death haunting the victims of Zio-Nazism.

Well, could that be a reflection of the more deadly silence of Arab countries, including those surrounding Palestine such as Jordan and Egypt, which haven’t uttered a word against the Nazis of our time, namely Israel and her guardian ally, the United States?

Are the Europeans and others saying effectively that “we can’t be more Arab than the Arabs themselves?

Or are they just resigning to the fact of Judeo-Nazism and coming to the conclusion that nothing can be done to stop it?