The Right of Return Cannot Be Dismissed 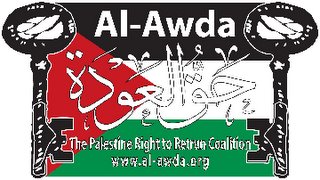 Key to My Heart. To purchase this tee-shirt, go to http://www.al-awda.org/shirts.html

What right does this fascist woman [Livni] have to say that refugees evicted from their homes and towns and villages at gunpoint have no right to return to their homes? The Right of return is the centerpice, the core, and essence, of the Arab-Israeli conflict. Without repatriation and indemnification of the refugees, there can be no peace, not after 500 years. Khalid Amayreh, Palestinian Journalist

The Director of the Center for the Right of Return for Refugees reiterated Friday that UN Resolution 194 is nonnegotiable.
Two-thirds of Palestinians are refugees and are not about to relinquish their right. It is not a bargaining chip for President Abbas or Prime Minister Haniya. As a collective and individual right, is cannot be dismissed for any reason. Any official in whatever the office may be cannot make any decision that prejudices that right.
History will not be merciful to any who slacks off on the rights of sons to return to the land of their fathers and grandfathers, whether they currently are in Gaza, Jerusalem, West Bank, Jordanian, Egyptian, or Syrian camps, or living further outside in the Diaspora.
The recent Israeli Foreign Minister statements to the United Nations that Israel rejects a two-state solution, illustrates the numerous Israeli officials who refuse to cope with the reality of international law. The Israeli unilateral disengagement plan, that meant to take settlers out of the Gaza Strip without ending the occupation, and putting more settlers into an ever-shrinking West Bank, is illegal.
Director Badrsawi stressed that the international community wishes that the parties find a solution to this thorny issue. But the Israelis will not abide international law, and the Palestinians will not accept the American support of Israel that seeks to renounce international law with a stroke of its pen.
Badrsawi said, “The insistence of the Palestinian refugee to return after 58 years is clear evidence of their position and steadfastness.”
He wondered, “What would be the fate of the settlements that engulf the Palestinian territories, which disperse geographic unity of Palestine and has become almost cantons? What of Jerusalem, which Israel is still working to Judaize. What of the expulsion of the indigenous population and the policy of hemming them in?” Badrsawi’s questions did not end there. He also wondered, “Why the wall of apartheid, which swallowed the land and tore the country, dispersed families and neighbors and demarcated a new and smaller border, stands despite international law against it?"
“Will the wall be within the anticipated Palestinian State, or will it move to the borders of 4 June 1967, the agreed-upon borders?”
He continued, “There is also a question about the fate of displaced refugees. Will the coming solution ensure their Right of Return? The answer is yes because there can be no solution without it. They have rights to their property and their stolen lives. Even if we suffer this point in its clarification, Israel still is not accepting the Right of Return for these refugees to their homes, to their land. But this is nonnegotiable. It is United Nations Resolution 194. Even to return to territories inside the 1967 borders, Israel still refuses that. But Israel’s refusal to accept return to Palestinian homes and villages inside 1948 Palestine led to inside 1967 borders. Israel refuses a two-state solution, Israel refuses the Right of Return, Israel refuses international law.”
Badrsawi concluded Friday, "The question remains, who or what will force it to do so."