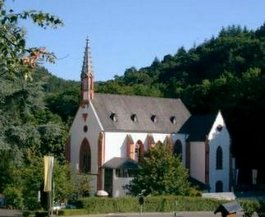 Marienthal in the Rheingau. Plaques on its walls attest to Pilgrims who have beseeched the Blessed Virgin's help for hundreds of years. Inside this small chapel is a stature of the Blessed Virgin from 1309. Today it was my pleasure again to visit Marienthal and while there I wrote in its message book the following: "Dear Mother, please help the Palestinians."

The American Federation of Ramallah, Palestine, the largest Arab-American organization in the US passed the following resolution at its 2006 Convention in Jacksonville, Florida (note that the original inhabitants of Ramallah are Christian): "We are strongly against any proposed resolutions being discussed today in Congress that foster the impression that Christian Palestinians are discriminated against in their own homeland by the Palestinian Authority. There continues to be good relations between all Palestinians."

Pope Benedict XVI on Monday, 25 September, met with Muslim diplomats in Rome in an effort to mend relations with the Muslim world following his recent speech which depicted Islam as a violent religion.

The Pope reportedly assured envoys from 22 predominantly Muslim countries that he had “total esteem and profound respect” for Islam and Muslims. He also pointed out that both Muslims and Christians must reject all forms of violence.

The high-profile meeting should be seen as signaling the return of stable and normal relations between the adherents of Islam and followers of Roman Catholicism.

The Pope has already stated that he never intended to malign Islam or insult its followers, insisting that his speech was misunderstood.

I believe Muslims, especially religious scholars and public opinion leaders should sincerely welcome such gestures of good will by the Pope and urge ordinary Muslims worldwide to refrain from making convulsive and emotionally-charged remarks against the man or the Christian faith. After all, and despite our the troubled history of Islam and the West, we still have much in common with Christianity, both in terms of theology and morality.

Moreover, it is not true at all that the Pope is an ecclesiastical equivalent of George Bush as some Muslim writers have been claiming rather erroneously of late. A man who truly seeks reconciliation with Muslims is not like the tyrant of the White House whose hands are stained with the blood of tens of thousands of Iraqis, Afghans, Lebanese and Palestinians.

We must possess a sense of distinction, otherwise we would appear as irrational rabbles who are prone to violence and incapable of reasonable discourse.

Besides, Muslims should think many times before doing or saying things that would alienate over a billion Roman Catholics all over the world who follow and give allegiance to the Holy See, and who are predominant in states where sizable Muslim minorities live and work like in France and Germany.

In fact, good, stable and even friendly relations with the Catholic world is a paramount geopolitical Muslim interest.

Catholic nations can be our natural allies in the face of the global tyranny posed by the United States and Israel. In fact, both Muslims and Roman Catholics and many other peace and justice-loving peoples have common goals in combating American-Zionist hegemony and designs for global domination. Have we forgotten that the only country that withdrew its ambassador from Israel following its recent criminal aggression against Lebanon was a Catholic country, Venezuela, whereas Arab states like Egypt and Jordan, which maintain diplomatic relations with Israel, remained largely silent while Lebanese children and women were being decapitated and mutilated by Israel’s smart bombs and hellfire missiles?


Today, the wantonly-pro Israeli evangelical Christians, commonly known as Christian Zionists, are trying to assert themselves as the universal representatives of Christendom. Some of these maniacs are already speaking of wiping Islam off the map and doing to Muslims what Adolph Hitler did to his enemies more than sixty years ago.

These morbid-minded religious fascists are decidedly against every thing Islamic and would go to the extent of condoning, even encouraging a genocidal extermination of Muslims, even other Christians, including Catholics, who don’t subscribe to their doomsday theology.

Hence, positive and friendly relations between Islam and Catholicism, based on mutual trust and mutual respect, could more or less create a kind of balance between Islam and the West and disprove the so-called “clash of civilizations” promoted by pro-Israeli circles in the United States.

More to the point, Muslims, especially official bodies such as the Organization of the Islamic Conference, can encourage the Vatican to an active stand against all violation of human rights and acts of oppression and persecution against Muslims and others like in Palestine where the Palestinian people are facing a Nazi-like occupation unseen since Hitler’s armies overran and destroyed much of Europe during the Second World War.

It is always in Islam’s interests to have a moral world in which morality rather than political expediency is adopted as the determining factors of the behavior of nation-states and the international community as a whole.

Undoubtedly, a serious dialogue with the Vatican should also convince the Church of Rome to take a vigorous stand against rampant Islamophobia in some western countries where everything Muslim and Islamic becomes suspicious even though the vast majority of Muslims are peaceful and law-abiding citizens.

Having said that, it is also obvious that Muslims ought to look inward in order enhance our own image and, more importantly, correct some of our ways and practices that go against Islam itself and the universal standards of human rights.

And the best way to go about doing this is by standing against extremists and terrorists in our midst who in the name of Islam or under its rubric attack and kill innocent people.

Yes, of course, Muslims are being subjected to a criminal onslaught by Israel and the United States and some other western countries, which has caused the death of hundreds of thousands of innocent Muslim especially in Iraq and Afghanistan.

However, the way to deal with these crimes is not to abduct innocent westerners in Iraq and decapitate them before TV cameras. This is not how Islam teaches its followers to behave.

Finally, we must, as ordinary Muslims and organizations, speak up against not only acts or remarks that insult our religion, but also against the despotic and tyrannical regimes in many Muslim lands that humiliate their masses by denying them their human rights and civil rights.

In short, if we don’t respect ourselves, we will not be respected by others.