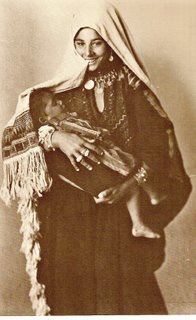 "For the average American, particularly of Arabic descent, some very effective political options exist today: a complete boycott of all Israeli products in the USA; a complete boycott of companies dealing and profiting from dealing with Israel; reviewing all elected officials voting and donations records as they relate to support of Israel and contacting them; encouraging the older generation to blog and write about their past; rooting-out the posers populating the major Arab blogs whose psychotic chatter is just intended to distract and create useless tangents to unwinnable debates."

I really like the part which says "encouraging the older generation to blog and write about their past."

A Canadian woman of Ukranian descent, whom I met in Okinawa, told me that until she saw pictures of Palestinians in my copy of Walid Khalidi's Before Their Diaspora, she believed that no one was living in Palestine.

Effective resistance includes the simple act of sharing old family photographs in order to disspell the pernicious lies that the huge Zionist propaganda machine, which consists of Zionists on the left as well as the right, perpetuates about Palestinians.