The Israeli occupation, not Islam, is the problem 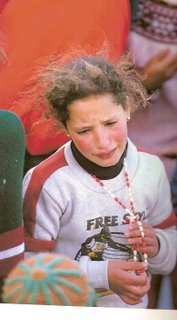 "We were at a neighbor's house when we heard shooting. People said someone was injured, so I rushed to see what had happened.

"I found 'Abui' [father] on our doorstep. I saw him gasping for air. I wnted to go with him to the hospital. He had a bullet in his chest.

"I was in a state of shock, as though I wasn't conscious. I couldn't think...Then I fainted." Linda Hamideh, daughter of Khadr Hamideh

From Khalid Amayreh, September 3, The Israeli occupation, not Islam, is the problem:

Netanyahu, a master of sound bites but an utterly poor politician, claimed that Israel was at the forefront of a conflict of civilizations between “fanatical Islam” and the “ democratic and civilized West.”

The vindictiveness and venomousness of his tone, not to mention the utter mendacity of his message, may well be compared to Hitler’s instigation against Jews and other non-Aryan communities in Europe prior and during the Second World War.

The Likud leader totally ignored the shockingly brutal occupation by Israel of Palestine and systematic, institutionalized persecution of its native Christian and Muslim inhabitants.

Hitler claimed the Jews posed a mortal threat to Europe and ought to be destroyed, and Netanyahu and like-minded Jews are now claiming that Muslims are posing a strategic threat to the west and must therefore be destroyed.

It is Aryan Nazism versus Zio-Nazism, same tactics, same ideology, same hate. Only the target is different.

There is no doubt that the Israeli occupation of the Palestinian homeland is the main generator of instability in the Middle East. This is also the main point of contention between the Muslim world and the United States and other western states that back and support the enduring Zionist occupation of Arab land.

Netanyahu, who had described the 9/11 events as “very very good,” must be aware of this established fact. This is why he and other extremist circles in Tel Aviv and Washington are trying to create as many distractions as possible to divert international attention from the real problem: Israel’s criminal determination to arrogate the occupied territories and deny millions of Palestinians the right to freedom and dignity as well as the right to life.

Indeed, one would exaggerate little by saying that had Israel been forced to abide by UN resolutions and stop its policy of land theft in Palestine, 9/11 and its aftereffects, including the American invasion and occupation of Afghanistan and Iraq, wouldn’t have taken place and the lives of hundreds of thousands of Afghans, Iraqis and Americans would have been saved.

But a gullible America, too powerful and too stupid, was led by a few Satanic-minded Zionist neocons to invade Iraq and sink in its quagmire.

Now the same evil-minded Zionists are hell-bent on getting the same stupid administration to attack another Muslim country, Iran, all in order to guarantee Israel’s military mastery throughout the Arab-Muslim Middle East and enable Netanyahu and his likes to obliterate the Palestinian cause.

Right wing Israeli and American Jewish circles never really tire spreading the cardinal lie that Israel is a western-style democracy living in the midst of the undemocratic predominantly-Muslim Middle East.

Well, is Israel truly a democracy? Does a democracy occupy, enslave, and torment another people for decades? Does a democracy murder children in the thousands, often by bombing their homes from high altitudes with smart bombs in the middle of the night and then routinely claim that the victims themselves bear sole responsibility for their own death?

Does a democracy send army bulldozers to demolish civilian homes, often right on top of occupants, in the quiet hours before dawn?

Does a democracy apply various sets of laws to citizens and subjects depending on their religion? Does a democracy systematically discriminate against a large segments of its citizens because they adhere to a different faith?

What kinds of a democracy is that which sanctions the murder of children in broad daylight and remunerates the killers with financial rewards, as was the case with Captain “R” who in 2004 murdered a Palestinian school girl in the Gaza Strip, Iman al Hams, and then shot here twenty more bullets to verify her death?

This is not a democracy, this is a murderous terrorcracy, a criminal entity not unlike the Third Reich, and the West will surely not be proud of such a representative.

Recently, as we all know, the Israeli army and air force destroyed the civilian infrastructure in both Lebanon and Gaza, including power stations, roads, bridges, fuel depots, schools, colleges, orphanages, and tens of thousands of homes, and murdered numerous hundreds of children, women and innocent civilians fleeing aerial bombardment or sleeping in their homes.

In Gaza and the West Bank, Israel is barring millions of tormented Palestinians access to food and work, pushing many impoverished people to the brink of starvation. The Nazi-like policy is intended to punish Palestinians for electing a political party, Hamas, that refuses to come to terms with the Israeli occupation.

Besides, who is really fighting and killing democracy in Palestine? Who is abducting an imprisoning and torturing democratically-elected politicians because they are not willing to come to terms with the Nazi like occupation of their country and the Nazi-like oppression of their people by the children and grandchildren of holocaust victims and survivors.

So, how can a country as such be representative of the post-war European civilization and culture.

In short, Israel is criminal, murderous entity whose ideological and military agenda foresees the occupation of large parts of the Middle East for the purpose of creating a huge Judaic empire extending from the Nile to the Euphrates.

And in order to realize these nefarious designs, the Israeli military-political-religious establishment would be willing even to use nuclear bombs against the peoples of the Middle East.

It is somewhat reassuring that many in Europe are already aware of the criminal nature of the Israeli state. Many Europeans are convinced that Israel poses a greater threat to world peace and security than any other country under the sun.

Israel, however, is ignoring Europe and concentrating on the United States where Jews more or less control the mass media and Congress through AIPAC.

Moreover, Israel and her agents (congress is always at Israel’s beck and call) are bullying the Bush Administration to invade and attack Iran by giving Bush the impression that the Republicans’ political survival depends on the launching of a military campaign against Iran.

You see, Israel is simply trying to trigger wars, bloodshed and turmoil around the world in order to gain the time needed to effect a sort of final solution of the Palestinian problem.

Now, they are saying that Israel is fighting the west’s battle against Muslims?

Well, is maintaining and perpetuating a Nazi-like occupation of Palestine and the brutal persecution and starving of millions of Palestinians a Western interest?

Will the west send its sons to the Muslim world to defend the Israeli occupation and apartheid and Zionist territorial aggrandizement?

These are important questions western nations must answer now, before it is too late. Don’t let the Zionists dupe you again.