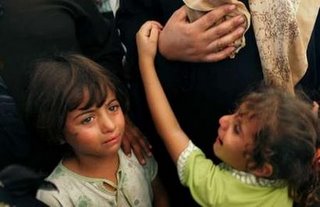 These two girls are mourning the deaths of Abu Odeh and his son Ismail in Beit Hanoun.

According to Palestine Center For Human Rights, Gaza, Mohammad Ismail Abu Odeh, 53, was killed "from a distance of 20 meters," with bullets to his head. HIs son, Ismail, 27, who went out of the house to look for his father was killed "with bullets to the chest and neck." Abu Odeh's daughters, Hanan and Azhar, 17, and 16, who went out "to look for their father and brother" were injured "by bullets in different parts of their bodies." The girls, whose condition is serious, were ordered to be put on an Israeli tank, where they bled for two hours before Palestinian medical crews were allowed in the area.

CNN International, which carried a Reuters story on the carnage in Beit Hanoun lacks clarity and does not specify that the Abu Odehs lived in another house, nor that the young girls were seriously wounded.

PCHR reports "Under a cover of intense gunfire, the IOF troops stormed the house belonging to Naser Subeih Abu Abu El-Fieta (48) to detain one of his sons. The house owner was injured in the abdomen and legs. The troops ordered the household to leave their house.

"Mohammad Ismail Abu Odeh (53) went out of his nearby house to see what was going on."

Reuters reports "Israeli forces shot and killed a father and his son when they raided a house in Gaza on Saturday....

"The army said two gunmen opened fire on Israeli forces from within the building, prompting troops to return fire.

"A spokesman added that two Hamas militants wanted for firing rockets into Israel and setting off explosives were also arrested by Israeli special forces from the house."

PCHR reports that IOF destroyed 9 homes. Six of them were completely destroyed. One of the destroyed houses was that of the victims killed by IOF, the house belonging to the late Mohammad Abu Odeh.

Reuters reports only that the house of the "wanted" man was destroyed.

Jewish German Council President, Charlotte Knobloch, who was given an opportunity to spin Israel's genocide in Der Spiegel would be pleased with Reuters shoddy reoprting. "I see an absolutely hostile attitude towards Jews and Israel. Signs that read "Israel -- Child Murderers" are being carried through the streets at demonstrations here, for example. The police don't confiscate these placards."

Not only does Israel murder kids; it murders their mothers and fathers. Israel imprisons kids. Israel renders kids homeless. Israel ethnically cleanses kids. Israel institutionalizes bigotry. Israel does all this while Zionist bigots monopolize the conversation on the right and the so-called "left" and if that doesn't work intimidate people from telling the truth about Israel's ongoing genocide.