Hostage Taking By the Irgun 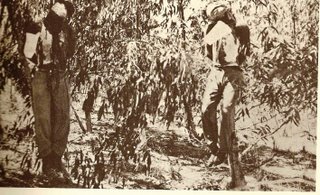 Hostage taking and sometimes the murder of hostages were two terrorist practices introduced by the Irgun under Menachem Begin. This photograph shows the bodies of two British army sergeants, Clifford Martin (left) and Mervyn Paice. Taken hostage by the Irgun, they were hanged and their bodies booby-trapped to kill the would-be rescuers; July 1947.

From: Khalidi, Walid, ed. Before Their Diaspora: A Photographic History of the Palestinians, 1876-1948. Institute For Palestine Studies: Washington DC, 1991.