Episcopalean Communion Caves In to ADL 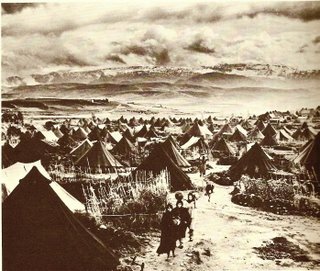 If you find that you can no longer look away, take up your cross. It takes courage as we were promised.

The Episcopalean Communion caved in to complaints of the ADL and removed Jerusalem Bishop Riah Assal's words from its website. Bishop Assal's accurate depiction of Zionism's effects on the native Palestinians may be read on Holy Land Christian Ecumenical Foundation's website (below). Zionists "must silence all dissent and real criticism of racist Israel so as to maintain a toxic Zionist status quo - and what a shame that the church won't take the lead and stand up for what is right," writes Annie Annab.

Bishop Riah on the current crisis in the Middle East

For the past forty years we have been largely alone on this desert fighting a predator that not only has robbed us of all but a small piece of our historic homeland, but threatens the traditions and holy sites of Christianity. We are tired, weary, sick, and wounded. We need your help.

We have seen and we have been the recipients of the generosity of our American and British friends. We cherish the support of everyone throughout the world who stands with us in solidarity. Daily, I hear from many of them who express outrage at the arrogant and aggressive positions of President Bush, Secretary Rice, Senator Clinton, and Prime Minister Blair. I am saddened to realize just how much the deserved prestige of the United States and Britain has declined as a result of politicians who seem to devalue human life and suffering. And, I am disturbed that the Zionist Christian community is damaging America's image as never before.

Little more than a week ago, we were focused on the plight of the Palestinian people. In Gaza, four and five generations have been victims of Israeli racism, hate crimes, terror, violence, and murder. Garbage and sewage have created a likely outbreak of cholera as Israeli strategies create the collapse of infrastructures. There is no milk. Drinking water, food, and medicine are in serious short supply. Innocents are being killed and dying from lack of available emergency care. Children are paying the ultimate price. Even for those whose lives are spared, many of them are traumatized and will not grow to live useful lives. Commerce between the West Bank and Gaza has been halted and humanitarian aid barely trickles into some of the neediest in the world.

Movement of residents of the West Bank is difficult or impossible as security measures are heightened to break the backs of the Palestinian people and cut them off from their place of work, schools, hospitals, and families. It is family and community that has sustained these people during these hopeless times. For some, it is all that they had, but that too has been taken away with the continued building of the wall and check points. The strategy of ethnic cleansing on the part of the State of Israel continues.

This week, war broke out on the Lebanon-Israeli border (near Banyas where Jesus gave St. Peter the keys to heaven and earth). The Israeli government's disproportionate reaction to provocation was consistent with their opportunistic responses in which they destroy their perceived enemy.

In her recent article, "The Insane Brutality of the State of Israel," American, Kathleen Christison, a former CIA analyst says, "The state lashes out in a crazed effort, lacking any sense of proportion, to reassure itself of its strength." She continues, "A society that can brush off as unimportant an army officer's brutal murder of a thirteen year old girl on the claim that she threatened soldiers at a military post (one of nearly seven hundred Palestinian children murdered by Israelis since the Intifada began) is not a society with a conscience. The "situation" as it has come to be called, has deteriorated into a war without boundaries or limitations. It is a war with deadly potential beyond the imaginations of most civilized people.

As I write to you, I am preparing to leave with other bishops for Nablus with medical and other emergency supplies for five hundred families, and a pledge for one thousand families more.

On Saturday we will attempt to enter Gaza with medical aid for doctors and nurses in our hospital there who struggle to serve the injured, the sick, and the dying.

My plan is that I will be able to go to Lebanon next week - where we are presently without a resident priest - to bury the dead, and comfort the victims of war. Perhaps as others have you will ask, "What can I do?" Certainly we encourage and appreciate your prayers. That is important, but it is not enough. If you find that you can no longer look away, take up your cross. It takes courage as we were promised.

Write every elected official you know. Write to your news media. Speak to your congregation, friends, and colleagues about injustice and the threat of global war. If Syria, Iran, the United States, Great Britain, China and others enter into this war - the consequence is incalculable. Participate in rallies and forums. Find ways that you and your churches can participate in humanitarian relief efforts for the region. Contact us and let us know if you stand with us. I urge you not to be like a disciple watching from afar.

2 Corinthians 6.11
"We have spoken frankly to you Corinthians, our heart is wide open to you. There is no restriction in our affections, but only in yours. In return - I speak as to children - open wide your hearts also."


In, with, and through Christ,