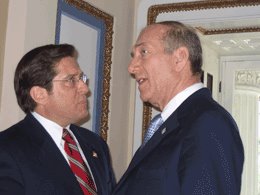 Meet Congressman Mark Kirk from Illinois and Congressman Steven Roth from New Jersey. That's the distinguished congressman from New Jersey there with Ehud Olmert. The esteemed Congressmen are aiming to fasttrack the current genocide in Gaza. Concerned that some UNRWA employees and aide recipients may belong to Hamas, the two sent a letter to Secretary of State Condoleeza Rice yesterday raising the alarm bells. A press release from Roth's office states, "The money (US contribution to UNRWA), which is the primary source of funding for the United Nations Relief Works Agency (UNRWA), is possibly being used to employ members of the terrorist organization Hamas and distributed to Palestinian refugees with terrorist connections—in direct violation of U.S. law."

UNRWA employs 24, 324 staff, the majority of whom are Palestinian refugees. Its programs include health and relief and social services, which includes food aide for approximately 220,000 Palestinian families, over 800,000 people.

Congressman Kirk touts himself in his blog as "someone who cares for animal welfare," and he supported HR 503 "legislation that will permanently curb the practice of slaughtering horses for human consumption."

And while Kirk and Rothman are concerned that US money may feed "terrorists," UNRWA's concern is regarding "insufficient donor pledges" for its Emergency Appeal, which will result in further deterioration of the humanitarian needs of the refugees.

Consider that UN Special Envoy for the occupied territories, John Dugard recently described Israel's actions in the West Bank and Gaza as "ethnic cleansing." He reports that seventy-five percent of the population in Gaza is dependent upon food aid for "survival." In light of this, Rothman and Kirk, by doing the bidding of their AIPAC masters, are aiding Israel in its genocide. Someone needs to tell these two legislators that aiding and abetting ethnic cleansing is a war crime. US citizens deserve better than these two foolish shills for Israel's final solution.