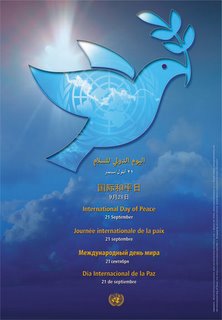 Reprinted from Bonsoir (thanks, Akram)

Action Alert: Peace One Day
Today, the 21st of September, marks the International Day of Peace. For most nations of the world it is a gleam of hope that peace will prevail one day. For the Palestinians this day is no different from any other day they lived -barely- under the occupation of the biggest threat to world peace, "Israel".
In October 2005, the European Commission conducted a survey representing the EU's member nations with the question of which country presents the biggest threat to the world peace. Israel came first with 59 percent of the votes.
Nevertheless, Our world, the whole world, is becoming so ignorant and so blind that the butcher is being treated as a victim and the victims are not even considered human enough to be dealt with.
Peace can prevail one day, but never with the current Israeli policy of occupation and apartheid in place. If the world is honestly committed to peace then all nations of the globe should unite against the Israeli barbarism just as firm as we all stood against the apartheid regime in South Africa.
If you build a house you start with one brick. If we want to build peace why not start with one day... and that day has arrived.
Jeremy Gilley (The British director and founder of the UN Peace Day)

Action Needed
Send an Email to:
- The President of the European Commissionsg-web-president@ec.europa.eu
- The UN Secretary Generalinquiries@un.org
- George W. Bushpresident@whitehouse.gov
requesting them to stop acting against the wish of the World, European, and American nations and urging them to stop starving the Palestinians and to pressure Israel to release the Palestinian prisoners, including the MP's and cabinet ministers, to end its occupation and apartheid, and to commit itself to a sustainable peace in the Middle East in which the Palestinians would be given back their basic rights including the inalienable right of return.