Pity the living, pity those who are left behind 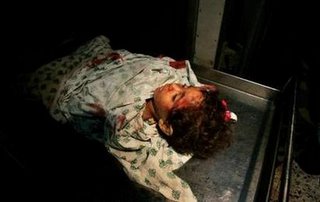 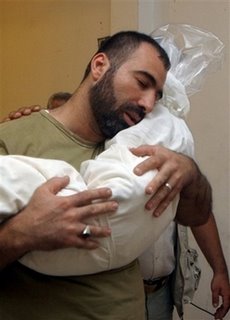 The following is by Hanady Salman in Lebanon (via angry arab).

When I went home last night, I rushed to Kinda’s bed as usual.
I pulled her arm and kissed her hand. For a second, I thought that her arm remained in my hand. Her small white arm left her shoulder and was in my hand. Suddenly she became parts and bits. Her foot was at one end of the bed, her leg was at the other. Parts and bits. My baby is nothing but parts and bits. Now, todya, she is still in one piece. What is it that will prevent them from tearing her apart? What is it I can do to prevent them from tearing her apart? Baby Waad has in her mother’s arms. She stayed there when the building fell on them. It was the rescuer who separated them. Waad died in one piece. Too small to be cut in two: she is, was, ten days old. From the mother, only one arm remained. They killed baby Hadi too. He had his diapers on. His mother should have known better. She should have changed his diaper; it looked really heavy in the morgue. They killed baby Manal. Baby Mohamad, baby Ali, baby every single name in the Arabic language. Those they missed here, they killed in Palestine. "ya Ali” , the man was calling in Srifa. “Ya Ali, Ya batal” . That’s how he was calling his sun, “hero”. The hero never answered back. The hero was under the rubble. Along others who are still under the rubble in Srifa. Along others who are still under the rubble in Houla, Aynatha, Aytaroun, Hallousiyeh, Taybeh, Maroon el Ras, Bint Jbeil. People are rotting under the rubble in every single village south of the Litany River in Southern Lebanon. There was a day, at the beginning of this, when we felt sorry for those who lost their homes. Reporters would use their best writing skills to describe how bad one might feel if one looses one’s house: in houses, there are photo albums, there are books, music, and “memories”, the reporters said. It is not poetic to mention winter clothes, kitchen utensils, underwear, fridges, heaters, air conditioners, cars and other trivial details people in poor neighborhoods spend years saving to get. Talking about left behind medicine, IDs, deeds, medical reports, birth certificates and other “vital” stuff is more likely to move the readers. Today, under the rubble, the house owners vanish. Forever they will keep their books, their music, their photos, their winter clothes, their medicine; they can hug their kids indefinitely. Under the rubble, one village after the other, one house after the other, memories take their owners along. Ashes. Pity the living, pity those who are left behind. Pity those who are dreading the day when it will be their turn to run down the streets, screaming, collecting the legs and arms of their loved ones, calling their names so loud their voices would reach the skies."