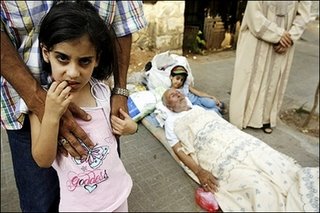 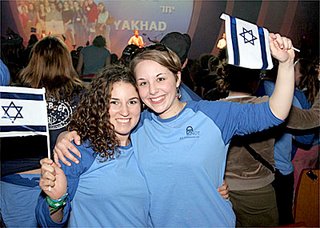 And here we have two North American chicks coming "home" to Israel. These are the type of gals with whom naive Arab bloggers, self-professed "moderates," swap hummus recipes. Or used to...Lebanon has been a wake-up call.

The Christian Science Monitor writes that the Arab and North American transplant Zionist bloggers aren't seeing eye-to-eye so much nowadays. Pity that they no longer will be used by Zionist propagandists to put a good face on Israel.

Like Miri Eisen, a transplanted American, who is hailed as a "Mother For Peace," along with Vichy Palestinian Noni Darwish, who comes on CNN to put a nice face on Israel's slaughter of handicapped Lebanese kids. At least Rosemary Church of CNN International didn't let her get away with it (this is a great video).

And, we have a family of Lebanese refugees, fleeing Southern Lebanon, to make Israel a safe place for transplant American yuppies.

My letter to Christian Science Monitor re the above linked story:

Jews and Arabs co-existed for centuries before the onslaught of political Zionism. So-called "moderate" Arab bloggers who pride themselves on forging on-line relationships with Israeli bloggers, many of them transplants from North America, are naively allowing themselves to be used to put a good face on Israel. Israel's barbarism in Lebanon has perhaps opened their eyes once and for all to the effects of political Zionism. No one should feel good about comparing hummus recipes with privileged Americans who transplant themselves to Israel to live in historic Palestine, ninety-two percent of which was usurped by Israel from its rightful owners, who were expelled by Israel in 1948 and now are bombed in their Lebanese refugee camps.