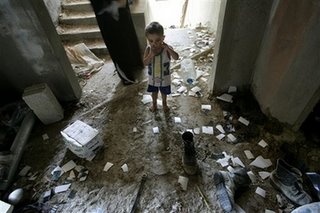 Israel's Occupation Forces occupied this boy's house and tore up the family photos.

I quite agree with the letter writer who finds "Clinton's pro-Israel bias disturbing."

Israel itself has taken shame to a new level, and really America should divest emotionally and financially from the institutionalized bigotry, injustice and brutality that is Israel today.

Politicians worldwide that pander to the home wrecking killing machine misnamed the Jewish state should be forced to watch their own home be bulldozed on a moment's notice and their own future destroyed by the removal of all their own basic civil rights and freedoms: Let them be stateless refugees like the millions of Palestinian refugees trapped in poverty and despair, crushed by a concrete apartheid wall and constantly attacked and harassed by Israel's immigrant bigots.

"We will have to face the reality that Israel is neither innocent, nor redemptive. And that in its creation, and expansion; we as Jews, have caused what we historically have suffered; a refugee population in Diaspora." Martin Buber, Jewish Philosopher, addressed Prime Minister Ben Gurion on the moral character of the state of Israel with reference to the Arab refugees in March 1949