International Law is the Basis for the Solution in Middle East 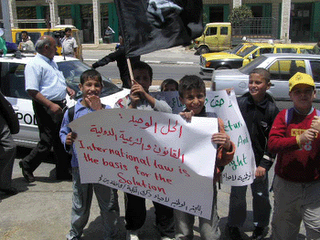 To: HeraldEd@herald.com
In response to a story about Israeli author David Grossman, whose son died in Lebanon: http://www.miami.com/mld/miamiherald/15310455.htm

"The state of Israel will now begin its soul-searching," says Israeli author David Grossman. If the state of Israel honestly assesses its collective soul it will find that its refusal to implement UN Resolution 194, which calls for the Palestinian refugees to return to their homes of origin, and to abide by Article 13, Section 2 of the Universal Declaration of Human Rights, which states that everyone has the right to leave his home and return to it, is the source of all the heartache in the region. 7.2 million Palestinan souls are denied this inalienable and individual right. It is indeed high time that the state of Israel does some soul searching.

To the Baltimore Sun in response to letters regarding playwright David Mamet's assertion that anti-Semitism informs persons critical of Israel.

Two of your letter writers [August 19, Letters] agree with David Mamet's notion that anti-Semitism fuels opposition to Israel. On the contrary, Israel institutionalizes bigotry by its refusal to implement the inalieanable and individual right of return for the Palestinian refugees, iterated in UN Resolution 194 as well as Article 13, Section 2 of the Universal Declaration of Human Rights. By way of analogy: I am always happy to return to California every two years after serving the Department of Defense Dependents Schools in Germany. Palestinians, too, long to return to their personal property and home villages in historic Palestine. Or are their rights, many of whom hold deeds to their personal property, relative to a well off American playwright's, who has an option to immigrate to Israel and be assured instant citizenship?

To the Chicago Tribune in response to Alan Schupack of the Anti-Defamation League:

Adam Schupack is paid, like many others who appear in the US media, to defend Israel's institutionalized bigotry (Voice of the People, August 19). The Declaration of Independence states: "We hold these truths to be self-evident, that all men are created equal, that they are endowed by their Creator with certain unalienable Rights, that among these are Life, Liberty and the pursuit of Happiness." One inalienable, individual right as stated in the Universal Declaration of Human Rights, Article 13, Section 2: "Everyone has the right to leave any country, including his own, and to return to his country." That's the core of the Middle East conflict. The rights of the Palestinian refugees are not relative to Mr. Schupack's, who as a Jew, may immigrate to historic Palestine, and become an instant citizen, while Palestinian refugees, many of whom who live within 100 kilometers of their personal, stolen property are denied this right.

And finally, to the Philadelphia Inquirer in response to a woman who was offended by bigoted remarks by Cynthia McKinney supporters:

Hannah Doughtery Campbell (Slurs unreported, August 19) is right to decry bigotry "toward those of the Jewish faith by [those linked to] an elected official." Even more deplorable, however, is the institutionalized bigotry of the state of Israel, which incorrectly calls itself the "Jewish" state, and which grants instant citizenship to any Jew from anywhere in the world who immigrates to historic Palestine while denying the inalienable and individual right of the Palestinian refugees to return to their personal property. This right, by the way, is iterated in UN Resolution 194 and is also stated in Article 13, Section 2 of the Universal Declaration of Human Rights: "Everyone has the right to leave any country, including his own, and to return to his country." Bigotry in all forms must be condemned.