Yoni Got His Gun 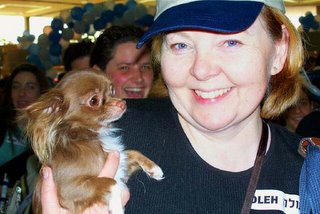 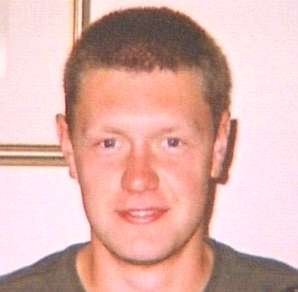 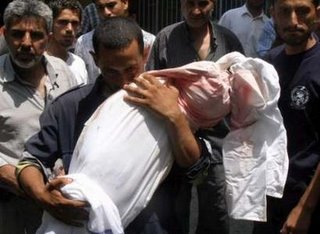 Ali Saffiyedin carries the body of his six year old daughter who was killed from an Israeli air strike July 23 on Tyre.

Sergei Valesiuk left the Ukraine for Israel six years ago. He died today defending Israel's right to continue its institutionalized racism; i.e., Jews Like Sergei, who changed his name to Yonatan so he could be more Israeli, may immigrate to Israel and become instant citizens, even though the people indigenous to the land, seven million of whom are refugees, and from whom ninety-two percent of the land was stolen, may not return home, in violation of UN Resolution 194 and also in violation of the Universal Declaration of Human Rights.

The woman with the dog is one of the US Jews, which the organization Nefesh B' Nefesh subsidizes to come and live on the stolen property.

And Israel has another Yoni to replace the Yoni who died today. US Yoni from Boca Raton, Florida, is eager to join in the killing of Lebanese and Palestinians. "'I'm needed by my country,' said Jonathan 'Yoni' Charust, 22, who holds dual citizenship in the United States and Israel."

Evidently unmoved by Israel's violation of the human, civil, personal, and legal rights of Palestine's indigenous inhabitants are the Zucker family.

"The Zuckers will leave their 4,700-square-foot home in Fort Lauderdale and settle in Ra'anana, an affluent suburb of Tel Aviv where he will take Hebrew classes. Zucker, a businessman, said his desire to help 'secure the future of the Jewish people is much more important than a big house.'"

And putting it all in perspective is the Zuckers fellow Floridian Ami Emanuel who sees his move to Israel as part of the "war on terrorism."

"There's always fighting going on. I don't think its anything new, really. And I think that for people to stop making aliyah, that's a win for the terrorists, that's what the terrorists want."

For all the weekend warriors from Florida, a portrait of a warrior; he neither crossed an ocean to settle on someone else's land, nor did he hop on an airplane to participate in bombing of poor people and refugees:

"One of the three men who died defending Maroon el-Raas is 48 years old Samir
Ali Diyaa, a father of 6 children. He was imprisoned by Israel for a number
of years before being freed through a prisoner exchange. In 1990 he was
severely injured in battle and lost one of his legs. He died defending
Maroon el-Raas"(e-mail).