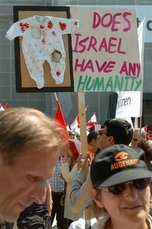 On 23 March, 1944, 33 German soldiers were killed when members of an Italian resistance group set off a bomb close to a column of German troops who were marching on via Rasella. Adolph Hitler got furious and ordered that within 24 hours, ten Italians were to be shot for each dead German. Herbert Kappler, the local German commander, quickly compiled a list of 320 civilians who were to be killed. On 24 March, the victims were transported to Adreatine caves where they were summarily executed by the SS.

Numerous similar “pacification operations” were carried out by the Nazi armies against civilians throughout Nazi-occupied Europe, in which men, women and children were brutally killed to avenge the death of German soldiers by local resistance fighters.

I know it is a taboo, especially in the West, to compare Israel, let alone Jews, to the Third Reich. However, if truth is to be upheld as an intrinsic, paramount value, it is inescapable to call things by their real name.

Today, in light of Israel’s criminal aggressions in Lebanon and Gaza, there is no doubt that Israel is thinking, behaving and acting like the Third Reich. And when Jews, or some Jews, think, behave and act like the Nazis, they become Nazis themselves.

Zionists are behaving like Nazis because they are murdering innocent civilians en mass to avenge the death of a few Israeli soldiers killed by resistance fighters in Lebanon or Palestine.

Needless to say, these fighters, whether you call them Hamas or Hizbullah, are struggling to rid their countries of a brutal Israeli occupation, very much like European resistance fighters in Nazi-occupied Poland, France, Greece, and other countries fought to get rid of the brutal Nazi occupation of their countries.

Evil crimes don’t become lesser when perpetrated by Jewish hands. There is no such thing as kosher genocide, or kosher holocaust or Kosher massacres.

Actually, if Jews are so intent on avenging the holocaust, the “logical” thing, at least from a Talmudic perspective, is that Zionists should direct their wrath to the Germans, the children and grandchildren of the Wehrmacht, Gestapo and SS, not to the innocent Palestinians and Lebanese who don’t have the means to protect themselves and their children.

Isn’t a sign of criminality and cowardice to target innocent and helpless civilians with the most potent machines of death?

I know that many Jews get vociferously furious whenever Israeli-Nazi analogies are drawn, especially by Europeans and westerners. They would claim that the holocaust was a unique event compared to what Israel is doing in Lebanon and Gaza.

Well, nobody is claiming that Gaza is becoming a new Auschwitz. However, nobody can deny that numerous helpless civilians are exterminated by the Israeli war machine. After all there are other means to “evaporate” people than sending them to gas chambers and incinerators (I am using the word “evaporate” because an Israeli newspaper, the Jerusalem Post, gleefully used this very word recently on its internet cite in reference to Palestinians killed in one Israel aerial bombing of a crowded Gaza street in mid July.).

In the final analysis, if brutal collective punishment is a criterion for qualifying anybody for the “Nazi” label, then Israeli behavior and Israeli leaders, politicians and military commanders alike, are undoubtedly the Nazis of our time.

Just compare Israel’s behavior in Gaza and Lebanon, following the capture by resistance fighters of three Israeli soldiers during military operations, to Gestapo and SS behavior in similar circumstances in Nazi-occupied Europe, and you certainly will discover the striking similarity.

Following that capture of an Israeli soldier by Palestinian resistance fighters at Kerem Shalom on 25 June, the Israeli army immediately started a month-long genocidal campaign against Gaza, destroying homes, schools, colleges, power stations, streets, orchards, citrus groves and annihilating entire families while sleeping in the privacy of their homes.

Indeed, by the time of writing this article (29 July), as many as 183 Palestinians, among them 37 children, have been mercilessly killed in the Gaza Strip alone as a result of sustained aerial bombing and artillery bombardment of civilian neighborhoods.

Yes, all of this pornographic bloodshed and wanton destruction in response to the abduction of one Israeli soldier!

And in Lebanon. Well, what is happening in Lebanon defies linguistic description. How can one describe the destruction of an entire country and the blanket bombing of homes, neighborhoods, streets, fleeing civilians riding in trucks and minibuses, all in response to the abduction of two Israeli occupation soldiers during a military operation aimed at freeing thousands of Arab political and resistance detainees languishing in Israeli concentration camps?

If this is not Judeo-Nazism, then what is it (by the way the term “Judeo-Nazism” was coined by the late Israeli writer Yisrael Shahak.)?

And if Israeli leaders, who ordered and oversaw these genocidal campaigns against innocent civilians, are not certified war criminals, then how should we view them?

This is a question that must confront the conscience of the world as it is unconscionable to keep silent while this evil power called Israel is behaving very much like another evil power did sixty years ago..

defently right! you know, here in France a lot of people(mainly young people) totaly agree with you since the 80's.It must change!
But what can we do against pure evil represented by America...they are great nazis too! and nazis associate themselves!
I really hope something will happened in people's mind.