We Will Forget the Bitter Days, My Brother 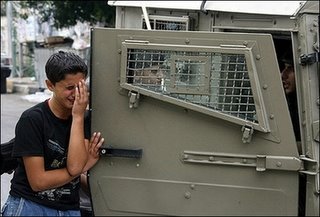 The caption says: A Palestinian boy, Mohammed, cries as his brother tries to persuade an Israeli soldier not to harm his brother during an Israeli military operation in the northern city of Nablus. Hamas called for an end to Israel's offensive after fighter jets blitzed Gaza, striking the interior ministry and militant targets in the latest assault aimed at securing the release of a captured Israeli soldier.(AFP/Jaafar Ashtiyeh)