Not My America, Senator Feinstein 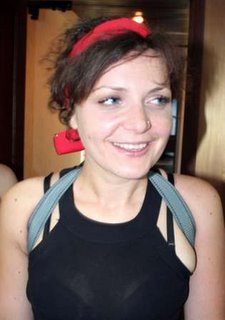 Layal Nagib, (photo) 23, photographer for the Lebanese magazine al-Jaras, was killed when Israeli forces struck her taxi near Qana. She was near Qana, fleeing southern Lebanon. Anthony Shadid interviews many of the victims in the Washington Post's heartwrenching "Civilian Toll Mounts in Lebanon Conflict."

But not to worry, according to the New York Times, "The Israeli military said in a statement that its aircraft operations over southern Lebanon on Sunday had targeted 'approximately 20 vehicles' suspected of 'serving the terror organization in the launching of missiles at Israel, and were recognized fleeing from or staying at missile-launching areas.'"

And Senator Dianne Feinstein is most reassuring, KCBS reporting her saying that "Israel and the United States share common values of democracy and the rule of law."

This evidently is the "rule of law" of the jungle that Israel has imposed upon the indigenous inhabitants of Lebanon, the West Bank and Gaza.

But it seems to me that Israel is slaughtering innocents to circumvent the law in order to defend its institutionalized racism which maintains that anyone with a Jewish parent or grandparent from anywhere in the world may immigrate to Israel, while refusing to implement the inalienable right of seven million Palestinian refugees to return home.

I would dare say that Eleanor Roosevelt, who helped to write the Universal Declaration of Human Rights to which Israel thumbs its nose knows more about "democracy" than Senator Feinstein.

Politicians throwing around phrases like "rule of law" and "democracy" better know what they're talking about if they don't want to emerge as nasty hypocrites defending bigotry and hate.