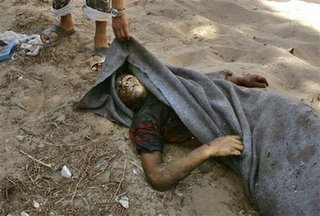 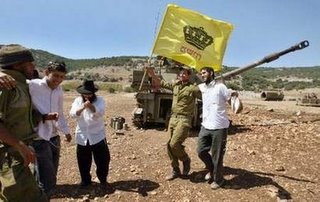 Zionists in Fassuta dance for the death of Lebanese. They were also photographed today writing on rockets bound for Lebanon. The body of a boy killed today in Beit Lahyia, Gaza.

The wanton destruction of Lebanon and Gaza by the Israeli war machine has opened the eyes of the world to the real nature of this Judeo-Nazi entity which knows no language other than the language of war, death and destruction.

It is a criminal state, a venomous viper, a monstrous evil power, unlike any other nation-state in modern history.

Indeed, one might ask further, what is the difference between exterminating civilians by way of bombing and destroying their homes in the quiet hours before dawn and exterminating them by way of gassing them in a concentration camp? Does mass killings of civilians become kosher and condonable when perpetrated by a Jewish Gestapo or a Jewish Wehrmacht?

Well, suppose that a member of a given family is a supporter of Hamas or Hizbullah, does this give Israel the right to annihilate his entire family, including toddlers and babies?

Perhaps it is futile to evoke logic and common sense when talking to the Nazis of our time, for they do know what they are doing and are fully aware of their own nefariousness and criminality.

However, for those who still don’t know, and they are unfortunately many, Israel must be exposed for what it is, a terrorist state that has no right to exist.

But Israel, ever since its misbegotten birth in 1948 has been exercising its existence by murdering civilians, destroying homes, bombing villages and essential infrastructure, bulldozing farms and orchards and expelling people en mass from their homes.

Whether it is in Palestine or Lebanon, Israel, a nuclear-armed state, has been ganging up on innocent civilians whose main occupation is to live their lives, feed their families and teach their children.

Needless to say, these barbaric behaviors, the gruesome images of which are relayed to people around the world, have created numerous enemies in the region and beyond, just as Nazi behaviors had generated a lot of hatred for the Third Reich.

Hating and resisting Israel for what it has been doing is therefore an inevitable reaction to Jewish Nazism. Just imagine yourself a Palestinian or a Lebanese who has lost his family, relatives, friends and home in an Israeli bombing of your neighborhood; or imagine being forced to live without electricity because the Israeli army decided to bomb and destroy the only power station in your town because two occupation soldiers were captured in an armed clash with guerillas. Imagine that you are barred from accessing food, water and work for years because a given political party won the general elections against Israel’s and America’s wishes? Imagine that you are cut off from the rest of the world and you are unable to receive your monthly salary because your people elected the “wrong” political party?

Well, this is already happening to millions of Palestinians while the so-called civilized world is watching gleefully as morally-bankrupt politicians keep parroting meaningless statements about the need for Hamas to recognize Israel.

By its criminal behavior, Israel has long lost whatever legitimacy it claims to have. Criminal states have no legitimacy and have no right to exist.

Of course Israel’s apologists and spokesperson will not stop arguing that Israel is only defending itself. However, such mendacious arguments don’t stand any scrutiny.

If you are private individual and another person hurled a stone at your car, you can try to stop him and no body will blame you.

But you have no legal or moral right to kill his entire family, destroy his home and property, and set fire to his entire neighborhood or town just to teach him a lesson.

Yet, this is what Israel has been doing in Gaza and Lebanon, which makes her a criminal state par excellence.

It is therefore imperative that the peoples of the world treat this rouge state as they would any common criminal in their midst.

In the final analysis, criminal states are like criminals individuals, they must be brought under control, or murder, theft, rape and vandalism will spread to every neighborhood and every home.

Dear Khalid- I doubt this will reach you but it never hurts to try. I was on the internet and frustrated at my american culture. I hate it here which I found to be ironic since I have never been out of my own country. I typed in " I hate america" and found you. I know our government is cruel but didn't know to what extent. Most people are completely uninformed and have no basis to formulate an opinion yet they readily do so. They watch their T.V's, eat their fast food, talk about what each others wearing. Such vanity...it makes me sick. There is no indepth thought here just self-appeasement and a push by this prententious society twards some eye pleasing image. And don't get me started on this sick, twisted government that reinforces it all. Just writing you to say I understand and agree with your view and am sorry for what my country is. Belive me I did not choose my heritage and if I did it wouldn't be american. It seems your life will give you much wisdom and insight- good luck and wish me the same..