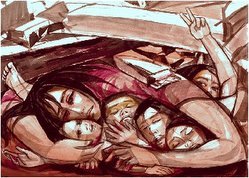 Ismail Shammout was a refugee who lived the Palestinian experience fully, and went on to tell the story through art. Dispossession, exile, identity, suffering, perseverance, and struggle, are all predominant features of his brilliant oil paintings, and his remarkable way of advocating for his people's cause.

Shammout was born in 1930 in the Palestinian agricultural town of Lydda, son to a produce wholesale merchant. He remembered clearly how their world had turned upside down when they were driven out of their homes on July 12, 1948. The Israeli soldiers ordered them, at gunpoint, “Out! Out!” and the family of nine was instantly homeless.

Lydda’s 25,000 residents were forcibly expelled on that day, and Shammout recounted that these included “old men and women, children, babies, pregnant women, sick people.” The people were herded eastward, towards Jordan, through rough, dusty terrain, without food or water, into exile and homelessness, to an unknown destination and future. The Shammout family arrived the village of Ni’lin, north of Ramallah, where they were welcomed with bread and water. “We were the lucky ones,” recounted Shammout, “Many collapsed on the way. Many did not make it.”

The Shammout family slept outdoors until a space was made available for homeless refugees to sleep in a girls school. “Several families had to share one room,” Shammout recalled, and subsided on bread and water. Since it was clear that the Israelis had no intention of allowing the refugees to return to their homes, Shammout’s father moved the family to a refugee camp in Gaza, where he had business colleagues. Together with his sons, they etched out a living by selling homemade halva on the streets.

Birth of an Artist

Shammout continued to draw and paint whenever he could obtain the necessary supplies. After volunteering as a teacher in Khan Younis for some time, Shammout was hired as an art instructor. One year later, with a savings of $30, Shammout went to Cairo to pursue his dream of going to art school and becoming a painter.

Shammout was clearly influenced by the images that were captured by his artist’s eye during his people’s exodus and then by their life of misery and despair in the refugee camps. By 1953, he had a collection of 60 works – oil paintings, watercolors, and drawings. He packed them up and proceeded to Gaza, where he presented the first ever Palestinian art exhibition.

One of the paintings was the now famous “Whereto?” A distraught father, on the forced march out of Lydda, carries a sleeping child on his left shoulder, while a little girl clutches his right hand and looks up at him in exhaustion, and a third child trails behind. A stunning photo-like record of the loss and helplessness that was inflicted on some 800,000 Palestinians in that year, and came to be known as “Al Nakba” (the Catastrophe).

The exhibition was extremely successful. To the promising young talents, it was a source of inspiration and motivation to go out and develop their skills. To the public, it was a moment of intense emotional feelings and pride. To Shammout, it was a boost to his self-confidence and his belief in art, its inspirational capabilities, and its value as an instrument of national struggle.

From Dream to Reality

Shammout’s first exhibition was followed by a second one the following year, in Cairo, inaugurated by President Jamal Abdul Nasser. Shammout displayed 55 of his paintings and invited two other Palestinian artists to participate. One of these was Tamam Al-Akhal, a refugee from Jaffa, who later became his wife.

This exhibition was equally successful, and with money from sales of his paintings, Shammout was able to go Italy to enroll at the Academia De Belle Arti in Rome.

Shammout worked on various artistic and cultural endeavors; in Lebanon, he became the Director of Arts and National Culture for the Palestine Liberation Organization (PLO). In 1983, following the Israeli aggression on Lebanon, and the expulsion of the PLO, he moved with his family to Kuwait. In 1992, the Gulf War caused yet another dislocation of Palestinians, and the Shammouts moved to Germany. Finally, they settled in Jordan.

In 1997, Shammout was able to visit his hometown, “as a tourist” (due to Israeli policies) after an absence of 50 years. Understandably, this was a very emotional experience; Shammout was happy to see his hometown, where he was born and raised. Yet, the pain of loss and exile was enormous.

The village’s church and mosque were still standing side by side, as Shammout remembered them. He had attended many church services with his Christian friends, and had celebrated the “Feast of Lydda” in honor of St. George, who was believed to be buried there. The first thing that the Shammouts did was to enter the church and light two candles. Then they proceeded to the mosque to pray and give thanks.

Shammout found his house, where he, his father, and his grandfather were born. It was occupied by a Jewish Israeli family who refused to allow them in. That painful experience was repeated at his wife’s home in Jaffa.

Charged with emotions, the Shammouts returned to Amman, where they embarked on their most ambitious project ever.

The Exodus and the Odyssey

“Palestine: The Exodus and the Odyssey” is a collection of 19 large murals painted by Ismail and Tamam Shammout from 1997 to 2000. The paintings illustrate, in chronological sequence, the plight of the Palestinian people since the creation of Israel in 1948 - from exodus and destitution to reconstruction, struggle, and reassertion of their rights. It is the artists’ impression as witnessed and personally experienced.

The collection starts with the once-upon-a-time “The Spring That Was,” featuring idyllic pastoral landscape, smiling peasant women, children, and dancing. Then begins a chronicle of the Palestinian plight; the forceful uprooting from their homes, the long march, the refugees, and the Diaspora, working as professionals in various sectors abroad.

As we enter the modern period, the paintings shift away from a narrative mode to a more symbolic one. In “Homage to the Martyrs,” the red canvas represents a sea of blood, melting into a carpet of roses, with women dressed in white, their dresses inscribed with names of massacres and martyrs.

Shammout’s final painting in the collection features the corpse of a Palestinian woman, in the shape of the map of Palestine, with red needlework on her dress spelling the words “love, good, patience, tomorrow…” and names of Palestinian cities “Nablus, Jaffa, Jerusalem, Nazareth…”

These epic pieces of art are witnesses to Palestinian history, to the Palestinian attachment to their land, the heart-wrenching pain of loss and exile, the undying hope for future redemption.

Shammout is considered to be a founder of modern Palestinian visual arts. His art consistently features scenes of the Palestinian tragedy and struggle, and are widely reproduced in Palestinian publications. Explaining the driving force of his art, and his dream of a Palestinian national museum in Jerusalem, Shammout said “We shall continue dealing with this subject because it is a way people can know about the suffering, sadness, and dreams of our country. All these works are a gift to our people and one day they will be held in a Palestinian museum.”

On a Personal Level

The Shammout home in Amman is practically a museum – and an astonishing one. The living room features huge paintings, including his classic “Whereto?” Ismail’s personality was always extremely warm and hospitable, and he was very easy to work with and befriend. He was also generous, allowing Palestinian charities to benefit from his work, including a 2006 calendar that benefitted several organizations working with refugees.

Shammout had been ill for the past few years, receiving heart surgery twice. He passed away during his third heart surgery. He is survived by his wife and sons.

Due to his wife’s care and support, Shammout was able to carry on with his work and continue painting up until his very last days. One of his latest, and my favorite, pieces is called “Gaza” and features a Palestinian man with his arms wide open, as though crucified.

Rest in Peace, Ismail Shammout – artist, historian, activist, advocate, and compassionate humanist. Tawfiq Zayyad’s poem, “All I Have,” is a fitting tribute to end with:

I never carried a rifle
On my shoulder
Or pulled a trigger.

All I have
Is a lute’s memory
A brush to paint my dreams,
A bottle of ink.

All I have
Is unshakeable faith
And an infinite love
For my people in pain.

*Haithem El-Zabri is the director of Palestine Online Store which features some of Shammout’s works and has produced a calendar featuring "Palestine: The Exodus & The Odyssey."