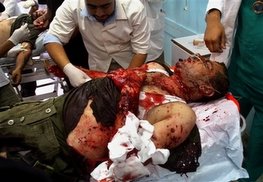 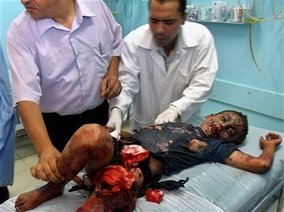 Read about Israel's other genocide in the occupied territories:

Hassanain denounced in his report, "the use of the Israeli forces' internationally prohibited missiles that contain chemical materials and burning metals and in addition, have shrapnel in the shape of nails". He pointed out that the injuries received in the hospitals as a result of these missiles are very dangerous because the human tissues and muscles are torn and in addition, the injured suffer from severe bleeding, loss of limbs and broken bones.


The spokesman for the Ministry of Health, Radhi Khalid, told PNN that the 20 injured were all children, as the attack occurred very near to a grade school. He noted that all of the children were transferred to a nearby hospital, where nine are being treated for “serious injuries.”

Deaths have been rising, and humanitarian conditions have deteriorated in the Gaza Strip since Israel invaded the region three weeks ago.

Since Israel's 3 day attack on Maghazi refugee camp in central Gaza, the death toll has increased to 14, and injuries have reached 130.

That Was the Week That Was (Deadly for Palestinians)

26 Palestinians, mostly civilians, including 5 children and two women, were killed by IOF.

At least 200 Palestinians, including 55 children and 5 women, were wounded by the IOF gunfire.

IOF conducted 27 incursions into Palestinian communities in the West Bank, and reoccupied areas in the Gaza Strip.

IOF moved into Nablus, destroyed a number of governmental and scurrility buildings and detained at least 100 security personnel.

At least 70 houses were partially destroyed and a number of civilian facilities were severely damaged in the Gaza Strip.

IOF arrested 31 Palestinian civilians in the West Bank, and 5 others in the Gaza Strip.

A number of Palestinian civilians were used by IOF as human shields during military operations in the Gaza Strip.

A number of houses were transformed by IOF into military sites.

IOF warplanes launched a series of air strikes on the Gaza Strip; a number of governmental buildings were destroyed; dozens of families in Beit Hanoun and al-Shouka villages were forced to vacate their houses; and electricity networks and transmitters were attacked.

IOF have continued to impose a total siege on the OPT; IOF have imposed a tightened siege on the Gaza Strip; Rafah International Crossing Point on the Egyptian border was partially reopened to allow Palestinians stuck at Egyptian side of the crossing point to travel back to the Gaza Strip; and IOF positioned at various checkpoints in the West Bank arrested 6 Palestinian civilians.

IOF have continued to construct the Annexation Wall in the West Bank.