I Pray the Lord My Soul to Take 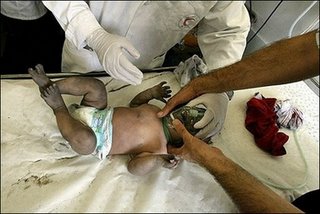 In Shifa, Gaza, on July 15, 2006, three babies were injured by the barbaric Zionist Wehrmacht and Christians for Middle East Peace urged Americans to call the White House Comment Line with the following talking points:

1. I condemn the provocative raid and capture of Israeli soldiers by Hezbollah and their continued rocket attacks on Israeli civilians.
2. I urge the President to work with the United Nations to press Hezbollah and its supporters to stop attacks on Israel and to return the captive soldiers. I ask the President to cooperate with international diplomatic intervention efforts.
3. I appeal to the President to work with the Israeli government to restrain their use of military force. Israel’s retaliatory response, which has resulted in civilian deaths and destruction of infrastructure in Lebanon, has been disproportionate and weakens the Lebanese government.
4. I call on the President to help end the current Middle East violence and restore hope for Arab-Israeli peace

To which I replied:

I am a Palestinian, and I am a Christian. In fact, I am one of the original stones with roots in Ramallah, Palestine. I would like to recommend that you go to this link below and look at these pictures and look at the post attached to the pictures before you ask any self-respecting Arab to condemn Hezbollah for a legitimate military attack and issue a mealy mouthed appeal for Israel's "restraint." Organizations like yours are part of the problem; there will be no peace without justice for the Palestinians and that means implementation of the Universal Declaration of Human Rights, Article 13, Section 2, "Everyone has a right to leave his country and return to his country." That's what your organization needs to shout, an end to Israel with its institutionalized bigotry, and end to a country in which Arabs' rights are relative to Jewish rights. Tell the world about racist Jews preferred Israel, a place to which Ambassador Dan Kurtzner's brother just immigrated, but we can't even visit our parents's graves if they happen to be in Jaffa or Haifa or at least 438 other villages from which we were depopulated; show some backbone; you owe it to these children.

I copied and pasted As'ad AbuKhalil's post of the murdered Lebanese children to go with my message.