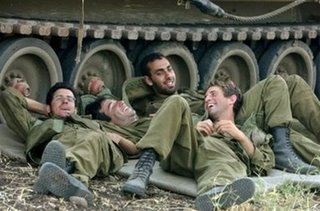 When Israeli Prime Minister Ehud Olmert’s suggested on 22 June that Jewish lives were worth more than Palestinian lives, he was actually making an ideological statement of immense significance and symbolism.

The plainly racist remarks, a repugnant taboo in any western country, encapsulate the entire Zionist discourse toward non-Jews in general an Palestinians, Lebanese and other Arabs and Muslims in particular.

The pornographic killing by Israel of Lebanese and Palestinian civilians, as well as the systematic wanton destruction by the Israeli air-force of civilian infrastructure in Gaza and Lebanon can be viewed as an honest translation of the Talmudic ideology, which more or less has come to dominate Israeli thinking as the Israeli society continues to drift menacingly to religious bigotry and chauvinism.

In fact, one can safely argue that Israel’s brazenly criminal behaviors towards the Palestinian and Lebanese people have consistently been a practical embodiment of the Talmudic perception of non-Jews.

This perception, racist to the hilt if not outright satanic, considers non-Jews as beasts or at best lesser human beings.

There is no doubt that a rudimentary survey of Rabbinic commentaries on the status of non-Jews according to Halacha (Jewish religious law) , of both present and past, reveals that a decisive majority of Talmudic sages view goyim (the derogatory Hebrew term for non-Jews) as either animals or sub-humans.

The rabbi’s remarks were reported by the Israeli press and aroused no reactions whatsoever, reflecting rampant racism in Israel.

In 1994, when an American Jewish immigrant named Baruch Goldstein massacred 29 Arab worshipers as they were praying at the Ibrahimi Mosque in Hebron, militant Gush Emunim (block of the faithful) Rabbi Moshe Levenger declared that “I am sorry not only about dead Arabs but about dead flies.”

A few days after the massacre, Goldstein was eulogized by the Rabbi of Kiryat Arba, Dov Lior, who praised him as “full of love for fellow human beings.”

According to Israel Shahak, author of “Jewish History, Jewish Religion-The weight of Three Thousand Years,” the term “human beings” according to Halacha refers solely to Jews.

Shahak’s view is vindicated by numerous Talmudic passages, such as the following:

“All Gentile children are animals.” ( Yebamoth, 98a.); The gentiles are outside the protection of the Law and God has exposed their money to Israel.” (Baba Kamma, 37-b.); “God created them in the form of men for the glory of Israel. But Akum (non-Jews) were created for the sole end of ministering unto them (the Jews) day and night. Nor can they ever be relieved from this service. It is becoming to the son of a king (an Israelite) that animals in their natural form, and animals in the form of human beings should minister unto him. ( Midrasch talpioth, fol. 225d; “the sexual intercourse of a Goi is like that of a beast.” (Sanhedrin, 74-b, Tosephot).

Now, these Talmudic injunctions, merely general examples, are not anachronistic anomalies that have no relevance to Zionism as many Israeli apologists and spokespersons would argue.

In fact, they are being applied, even in brazen manner, in the West Bank and Gaza and Lebanon. The exoneration of Israeli soldiers convicted of murdering Palestinian children (like that soldier who murdered 13-year Iman al-Hamas near Rafah in 2004 while on her way to school), in many ways epitomizes the Israeli-Jewish perceptions of non-Jews.

In short, non-Jews, according to Talmudic teachings, are not men but beasts; even the best of the Goyim should be killed; they are unclean idolaters deserving of death; and the Jews are to rule over the world served by the Goyim.

This is the real explanation of why Israeli soldiers and settlers are killing Palestinian and Lebanese civilians at will without showing the slightest remorse.

This is also what made the Israeli Chief of Staff Dan Halutz remark that “I sleep well and have clear conscience” soon after he ordered an F-6 fighter to drop a one-ton bomb on an apartment building in the middle of the night in Gaza, killing 16 people including 11 children.

This is what makes Israeli pilots annihilate entire families in Tyre and Mirwaheen and then feel good about it.

The Talmud, upon which Orthodox or Rabbinic Judaism is based, doesn’t really distinguish between combatants and non-combatants in time of war. In fact, rabbinic authorities teach that killing non-combatants, including children of the enemy, is a mitzvah (good deed with which one endears oneself to God) in war time.

A few years ago, a leading Israeli Torah sage urged the Israeli army not to refrain from killing enemy children in order to save the lives of Israeli occupation soldiers in the Gaza Strip. When this writer consulted with a number of rabbis and scholars on whether the rabbi was a nutcase, I was told that he represented the mainstream within Orthodox Judaism.

Many Orthodox rabbis consider the international conventions incriminating the deliberate killing of civilians and the destruction of civilian homes and property , such as the Fourth Geneva Convention, as “Christian morals” not binding on Jews.

On 12 July, the right-wing Israeli newspaper, the Jerusalem Post, had this caption on its internet site: “Yesha Rabbis call for extermination of the enemy.”

The report quoted the rabbinic council of Jewish settlements in the West Bank as calling on the Israeli army “to ignore Christian morals and exterminate the enemy in the north and south.” Obviously, the term “Christian morals” here refers to laws of war which prohibit the killing of innocent civilians.

This totally satanic thinking doesn’t emanate from Zionism’s secular traditions, which are no less evil, but rather from the Talmud itself. For example, a prominent Talmudic figure, Shimon Ben Yohai, openly called for the extermination of non-Jews. (His tomb in northern Palestine is a major pilgrimage site for many Jews).

If a Jewish sect or movement can be described as “Nazi,” it is the Chabad movement, which openly advocates annihilation of non-Jews in Palestine on the model of the Biblical Book of Joshua.

Chabad is not a marginal movement. In both Israel and the US, it has been able to amass a lot of wealth and acquire considerable influence. The movement, with which thousands of Israeli soldiers and high-ranking officers are affiliated, views non-Jews as animals or infra-human beings.

According to its famous book, Hatanya, as quoted by Israel Shahak, all non-Jews are totally satanic creatures in whom there is absolutely nothing good. Even a non-Jewish embryo is qualitatively different from a Jewish one.

Indeed, the very existence of a non-Jew is inessential, whereas all creation was made solely for the sake of the Jews.

In conclusion, there is a broad conformity between Israeli behavior in Lebanon and the occupied Palestinian territories and Talmudic teachings on non-Jews. The fact that at least 50 percent of high-ranking Israeli army officers are indoctrinated in the Talmud does explain, at least in part, Israel’s genocidal onslaughts on civilians in both Gaza Strip and Lebanon.

More to the point, it is highly likely that this Talmudic trend of thinking and behavior will continue to grow and eventually come to define Israel’s entire discourse toward the peoples of the Middle East and non-Jews in general.