'This is your house' 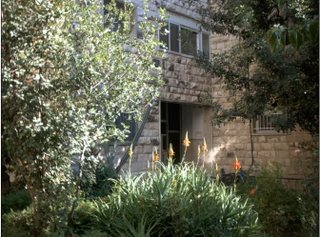 "The only way to Middle East peace is to understand that 700,000 Palestinian refugees and millions of their descendants cannot and will not go back to Israel."

I replied in a letter to the editor:

But the Universal Declaration of Human Rights states "Everyone has the right to leave any country, including his own, and to return to his country."

Where is the justice when 2500 French and North American Jews will hop on a plane this summer to make aliya to Israel, while refugees, some within kilometers of their personal property, are denied their basic human right? Kashi is disingenuous if he thinks peace will come in the wake of such glaring injustice.

"Homeland," writes Dr. Adnan Shahada, from Yasur,an ethnically cleansed and almost completely destroyed village 40 kilometers northeast of Gaza, "has a great significance in Arab culture. It means belonging, self-esteem and history for the generations who live in that part of the earth."

Another current Gaza resident, Abdallah Arabid, from Hiribya, a place, according to Walid Khalidi in All That Remains, that "resembled an oases," in which "citrus, grapes, bananas, and sugar cane" grew. The Israelis converted Hiribya's "mosque into a warehouse." Arabid says:

Isa Qaraq'a, currently living in Aida Refugee Camp, which is seven kilometers from al-Biqa'. He says:

"We went back to our villages one or two months ago. In one return visit to some Palestinian villages we met Israelis living in our houses, the houses of our fathers and grandfathers. And they had to admit, 'This is your house.' The features of the houses were still as they were. In one of the houses there was still an amount of olive oil that was kept for more than fifty years in a well."

In Iraq Al-Manshiyya, "It should be noted that Intel Corporation (the semiconductor giant) maintains & operates one of its biggest manufacturing plants outside the US (FAB 18) on a looted land...whose refugees live a "few miles to the Easts in the slums of the Gaza Strip." Refugee Ismail Abu Hashan says:

"More that 80% of Palestinians are still living in the region, a fact that speaks for itself. This is the biggest referendum confirming that their preference is the right of return."